Caravan of Whores A Cosmic Interlude 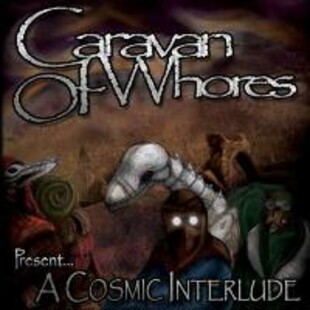 This modest 3 track EP by Caravan of Whores cannot be overlooked or dismissed on the name alone.

As the opening track, Now kicks in, the drums are of the familiar and yet, over-used desert rock school. The band couple this with an enjoyable riff that repeats nicely along with the bass.

Vocals follow with a kind of watered-down John Garcia style plus added delay effect where and when it is required. This continues with a nice break-up riff to alter the repetition.

Crowfeet Eyes stumbles along next with an intro riff that sounds like Tony Iommi's cast off's for early Vol 4 takes, with Bill Ward tumbling behind him.

As pictures in the slim jewel case depict, the band are clearly of the Iommi following due to the Laney amplifiers, then again, Sleep weren't much different in that respect but that is where the similarities end.

Crowfeet Eyes continues and lets itself down with terrible double bass drum use, the breaks where the riff turns back to the slow Sabbath-worship is a welcome break.

If mastering had been done slightly better on this release, you could swear that the band are from 1971 but never got further than a few local gigs. Creme Brulee style...

Sabbath-worship continues into a drawn out solo that is well placed at the end of Crowfeet Eyes this pops into a sprialling riff that could be the same sound that goes through many a padded cell.

Unfortunately the double bass appears again towards the songs end, Its not an easy thing to get right so if you decided to have a go at it, do it in a song that doesn't drag out for 8 minutes.

9 Bar is the final track, as many doom-fans know, being stoned is the perfect way to write songs that really crush and destroy eardrums.

This song begins with an easy going, Church Of Misery style vibe with Bill Ward-esque drums coupled with repetition vocals and guitars.

Overall this offering is a fine recording from what can only be described as the band that have done their name justice, the slight issue with the final product is just mastering and recording, this type of doom needs to be louder and more dense when its recorded, be it with bigger amps, dirtier guitars, fuzzier bass and mountainous drums.

Go and find them.

Forums - Reviews and Articles - Caravan of Whores - A Cosmic Interlude