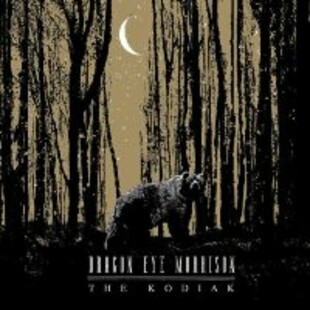 When a band names themselves Dragon Eye Morrison many people are not sure what to expect however upon listening to Portsmouth-Metal, you hope for some larger than life riffs and interesting patterns.

From what I gather, Dragon Eye Morrison have been slamming away with their own sound for the past 10 years and manage to incorporate hardcore, progressive, metal and a little doom thrown in for adequete measure. The band appear to be in some sort of hibernation following 2011's Drama EP but still seem to be active despite having no shows lined up.

The Kodiak EP, released in 2011 is a packaged in a generic way, a slim plastic wallet, CDR and an inlay. I understand that bands work to budgets and have been there myself many times before but, is it not worth the extra hundred quid for a decent package? either way, the CDR skipped so this review was completed via their deserted Myspace.

Regardless of the package, the music contained within the CDR is quite well produced and performed with interesting hooks and gigantic riffs which luckily set the band aside from your average 'metal' band. From what I have found that appears to be the bands mission as vocalist Adam Hatton claims:

“Heavy music is buried in a morgue of mediocrity. The public is obsessed by brutality, yet when the layers are peeled back there is nothing of substance. An unnerving density combined with a visceral, intelligent melody is what defines us”.

that's not to say that Dragon Eye Morrison or DEM as they like to be shortened to, don't have any substance but they do seem to have mixed a few styles of metal and hoped for the best.

As many readers will know that being in a band that plays 'heavy' music involves a lot of guess-work to determine what the end results will be, DEM are no different from this, they have as much of a shot as anyone else that has relatively good ideas.

The Kodiak EP begins with an acoustic, Metallica inspired intro for Snake Route Road which is a good track to kick off with, it blends a mixture of double bass drum as electric guitars back it all up, as this drifts along it abruptly stops to explode into Integrity-style vocals with slightly 'textbook metal' riffs that are quite dull and if you've not heard them before on other albums, you live in a cave.

Track two is named Wendigo Down, referring to a cannibal-devouring, mythical creature that has been featured in comics and literature for many years. As the track starts up, the listener is greeted by jangly and somewhat ethereal guitars backed with a phased effect and a simple drum beat.

The track builds gently with extra noise and catches the listener off-guard with standard Metal again, back to thrashing with the same vigour as previously mentioned.

There is absolutely no intelligent melody in any of the songs listed on the EP at all, there are however some interesting patterns that emerge in the songs themselves. If it was claimed by Adam Hatton that the band had 'intelligent intros' then he'd have been right.

Black Fire follows to close the EP, it has slightly different variation on the same theme that the rest of the EP relies upon, that's not to say that the band aren't a strong bunch of musicians but the avenue in which they have taken is what will only pull them around local gigs and releasing EPs.

Perhaps an album, packaged properly and gettting a bit more progressive with their structures and sounds would bring more of an interest.