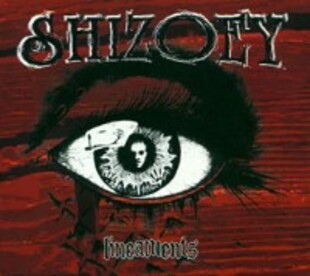 Shizoey, yep, say that one again in your head, you have immediately thought of Shit-Zoey haven't you?

Well you may not be far wrong with the voice in your head this time...

West Austria has never been famous for music, but Shizoey are here to turn that around and blow your mind with Lineaments, their 2010 debut album distributed by World Sound.

This arrived through my door with a stack of other releases and I pulled this one from the top and put it through a pair of Marshall headphones to hear all the indiosyncracies that I had hoped to hear reflected in the Go With The Flow inspired artwork.

As the album beigns, the listener is greeted by some fairly convincing 'Rock' sounds as an intro floods in through the speakers and holds its own quite nicely. The next track is where vocals are introduced, I'm not 100% sure that many european bands share my view of vocals, it all comes down to when I heard a French Rolling Stones tribute band cover Under My Zumb.

The vocals unfortunately let the overall songs down as the lyrics don't seem to have any good grasp of their chosen subject. St Anton is a prime example of this, the song itself has instantly forgettable lyrics as well as some incredibly over-done guitar solos, Jesus, there must have been about 4 solos in there, not sure as I lost track completely.

One shining light for this band must be the jams that they manage to drift in and out of in the first three songs. The quality of musicianship is shown in these jams where no-one sings and the band trip out a bit and left the listener join them on their twisted voyage.

As Shizoey begin with the ever popular drum stick count in on the next track, adequately named, Shizoey. It becomes very apparent with the weak riff that leads into the singer asking 'Who is shitting in my basement?' which to my English ears sounded like, 'Who is shitting in my face now?' alongside a Primus-esque riff and yet again a dreadful, over-baked guitar solo comes soaring in and closes the party about dog-shit down.

If I could bring myself to like this band I'd probably tried to figure out why they named the album after their dog called Zoey or why it was shitting in some dudes basement but life is too short.

The next extravaganza to grace my ears is Black Stones which is probably the bands favourite to play due its Metallica like structure and cleanly picked arpreggio intro with attempted, gigantic chorus which co-incidentally doubles up nicely for yes...you guessed it another, slightly too long guitar wank.

Dead Baby follows next, with some embarrassing wah-wah guitar, the wah wah pedal has always been there in heavy music but used slightly differently to funk-rockers or Hendrix clones, Kyuss made great use of one in nearly all of their back catalogue, Sabbath did too, go listen out for it, pretty much every guitar player worldwide wants or uses one so its understandable that its going to be on many great albums, it just depends on the right ear hearing what sound best, not Shizoey.

In My Dreams is not only a poor choice of song title but again, it faces the problem of the band not being 100% together on style in this song, the guitar wants something the rest of the band don't but are probably afraid to ask, it will have made it onto the final mix due to it being less than two minutes long, therefore creative minds can reach a compromise.

Flow pops up next with a what sounds like a child playing the bass on christmas morning, I assume that someone has been looking at too many Queens Of The Stone Age albums in order to try and pinch ideas...naughty naughty, you've already had the theme for the cover art from go with the FLOW....

Oriental Dream is what the listener is in for next and its intro is what can possibly save the entire album, it begins with Pink Floyd, Careful With That Axe-style guitar and bass and you kind of hope to hear Roger Waters talking about flames and flickering but what actually comes is a sonic assault from the entire band. Like their Jams, this track seems to have it all, no singing, eastern european-style guitar screaming with conviction and the wah wah pedal left completely off. The bass thunders through the back with long drawn out, Sunn-O))) vibes.

The overall production of this release is very generic, but if it had been mastered to make it slightly more crushing, we could have been in for a treat on Oriental Dream alone, but it feels as though the band would be able to cause more waves if they jammed like fuck on all of their stuff and played/recorded at maximum volume.

As the album draws in to a close the band try their best to get the listener going with Empty Eyes, you'd be hard pressed to not skip back to Oriental Dream and have that again as the singer is back with a bang and the guitar solos flood back with missed notes, lack of fret-accuracy and single note shredding that is completely drenched in reverb.

This song ends and is mastered so that you can hear the band chuck their headphones onto the floor and the guitarist stamp on his pedals to switch them off so they can all run to hear the freshly recorded shite.

If you have an Intro, you need an outro, and sure enough, Shizoey provide that for the listener with a few bum notes from the bass player and some weird and not wonderful guitar solos over the top.

This album ends abruptly and is good for the one track, Oriental Dream. Its probably worth a download if you can be bothered.

The overall packaging of this album is actually quite nice, digipack, interesting artwork, photos of the band but I digress, its theme throughout is too varied and if you write a song and use an image of a dog and sing about it shitting, you'll probably only get the listener thinking one thing, Dogshit.