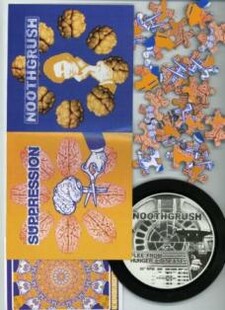 This was handed to me at the recent I'll Be Your Mirror event, put together by All Tomorrow's Parties. Guy called Joe with a flattened afro was handing flyers for it out with a girl and I asked if it was new.

Turns out its a recording from 1998 that never managed to see the light of day. Being handed a CD-shaped package I expected it to be a CD version of the tracks, but nope, 5"s are the same size as our plastic buddies, fully awesome as you can see from the pic.

So with only about 2-3 minutes each side, is this worth a punt? Well, yeah.

Simply put, you won't have time to set the needle down and then sit down before having to get up to flip it over, however what is on both sides is incredible. Noothgrush manage to pack in riff after riff of sludge-laden violence and keep it slow and brutal. This is the kind of boot-stomping stuff we've come to expect from perhaps the weirdest-named band ever. The track is full of a surprising amount of invention given its short timespan and any record collector worth their salt and into their caustic feedback will be interested in this.

Suppression on the other side screech at you with electronics and amp squeals for a few seconds before their grinding pulverisation gets going with adequate retching vocals and pummeling bass and guitar. Sounding for all the world like a Haymaker tribute, this could be the soundtrack to the world's most uninviting gym. Black sweat dripping from the walls and ceiling while mutant-like freaks of nature do too many push-ups and bench presses.

This takes you back to a time when this kind of music was being made by everyone and their weird mum, but taken 14 years later is like opening a time capsule full of effluent, stinky and unpleasant. Much more than just a novelty or curio for collectors, this is actually great.

A certain come with a 2-sided puzzle of brains and brain stems, the challenge must be to finish it before the record clicks off, no counting the run-off groove! You can enquire as to how to get this fetid record in your life here and also here.