The first of a long and arduous articles, our very own Gareth is forced to listen to genre classics, the first? Electric Wizard's dark masterpiece Dopethrone.

War Pygmalion is to be a series, not exclusively written by Gareth in which we get people who have never 'got' certain genres to approach recognised classics of various genres. We hope this sheds new light on records we have played to death. With fresh ears, comes fresh interpretations, surely? We shall see, here is Gareth's impressions of the titanic doom metal paen to misery Dopethrone by Electric Wizard. (Mike, Ninehertz Editor-in-Chief) 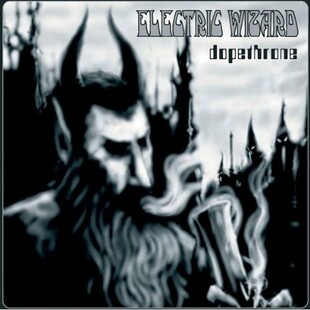 My reviewing role with 9Hz came about by happy accident. I met original founder Pete and we got chatting about stoner rock, specifically Fu Manchu's output between 1997 and 1999, and Kyuss' Sky Valley, and a short time later he asked if I'd write some reviews. Now, as that was many, many years ago now, how do I remember the bands and albums we discussed so specifically? Well that's all it could have been, because that's where my knowledge of stoner rock starts and finishes. Note I use the present tense as I still haven't learned very much since then. I own the same number of stoner albums by any band combined as I do CD's by Minus the Bear. I know even less about doom.

Whenever Mike starts telling me about the difference between black metal, crust and powerviolence my eyes glaze over and I start playing Crocketts Theme' in my head until it looks like he's stopped talking. It's only my passable grasp of the English language and many years experience as a musician that means I can string a usually coherent review together where it sounds like I'm saying anything with any kind of authority.

With this in mind, it was time I sat down and redid my basic metal education by listening to various records considered classic in their genre. While Mike considers a recommended listening list and whether or not this isn't actually a stupid idea, I started with a record that I borrowed of Carey about 2 years ago but never got round to properly giving any attention to; Dopethrone.

I have admittedly heard Dopethrone before, but my experience of it has been limited to driving across bleak landscapes (the Scottish Highlands, Worksop) in the drizzle while it's on in the car/van. My impression was that it's what crushing despondency might sound like if you played it through a fuzz pedal and a Matamp. I appreciate that these were not ideal circumstances in which to listen to new music, but having listened to it again I can reassure myself that I actually got the tone of the record about right. While the circumstances were not right for, say for example giving the newest Mars Volta album a spin, or some classic 'Zeppelin (about which I know tons by the way), they were ideal for Dopethrone. Because it's a massively depressing record.

A select few moments aside, it's not a varied album; a long slab of relentless, claustrophobic riffs interspersed with a couple of bits of clean guitar. Apart from a handful of menacing filter effects and some clips from films inbetween tracks (including The Dunwich Horror which as a Lovecraft fan I approve of immensely), the only obvious studio trickery is frontman Jus Osborn's heavily effected vocals which bring to mind a sludge metal version of Greg Lake era King Crimson. Seriously, listen to 21st Century Schiziod Man and tell me Osborn didn't slide a copy of Court of The Crimson King to this albums engineer, nod towards it and give him a wink.

The lyrics themselves thankfully stay for the most part away from the standard genre mainstays of impending doom, but the songs that do fall into this rut read like bad teenage angst poetry. They're saved by being largely incomprehensible and the fact that there are only 2 tracks of this nonsense; the rest seem to be about amplifier worship, Lovecraft (again) and Conan the Barbarian so the band gets a pass here.

Overall, it's an album with a great sound, and while I point out the lack of variety, this is an occasion where that works in the bands favour as a unifying theme for the record. It's a good, maybe even great piece of music but it's unrelenting misery from start to finish and I'd struggle to get through it again in one sitting. I now understand the whole 'Doom' tag. And hopefully Mike will come up with something less harrowing for me to listen to next. Like the sound of a border collie puppy being put down. With a hammer.