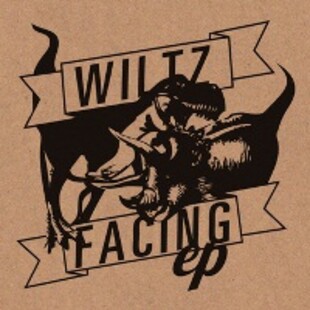 So, split 7 track EP. Wiltz with four, Facing with three.

Wiltz up first up in the dentist chair please. Open wide. Interesting guitar progression at the start there, how long have you had that? Keep that up. I see a post-rock leaning here, definitely some math rock leanings, methodical guitar work. Everything seems to be in order, never quite bringing too much order though despite the precision of the guitars playing off each other and the tight rhythm section. Oh and then you yell COPS! At the end of the song. Best one word singing I've ever heard.

Off into more melodic territory with Doin'-a-deh, guitars chiming pleasingly until ADHD apparently sets in and the song changes completely at a minute and a half in. Standard? Then another change half a minute later. Maybe some Ritalin might be advisable? Oh and you changed again. Careful, these old ears cannot keep up. It's all beautifully recorded though, crystal clear and each melody charming. Just, several songs could have come out of that, surely?

They close their half of the split with Justin Phillips, “for our most dedicate Facebook fan.” Lucky you Justin, this nigh anthemic closer rises even higher and bounces along. This really is such cheerful and racing stuff, putting a smile on the lips and getting the head nodding without the need for drippy vocals or obvious pop hooks. Take a summer drive with this on and you'll be bombing along winding roads in no time.

Next patient please. Interesting, you split with Wiltz on this release? Your sounds are comparable, more math rock shapes. Bar some tonal differences I'm surprised at the similarities. I can see how this would work as a consistent release, though I do wonder if a casual listener would notice the shift from one band to the next. I like my splits more divergent and clashing, in all honesty. Alas Wiltz had the primacy effect on this one, let me just try and shake that off and give Facing more respect. I am deeply charmed by the music-box ending to the first track.

Ah and the change occurs! Lyrics! Heavier guitars! There you are, the differentiation. Delighted to meet you, come in come in. Melodic vocals, earnest and some lovely echoing harmonies and backing vocals. A good move. Lead guitars reaching up and rhythm crunching along, it's relatively obvious hardcore faire from what I know but executed with definite talent and skill, and the recording captures the heavy without losing focus.

Quite honestly though, primacy bias or no, I prefer Wiltz's efforts. Controversial! Fight on a split! I jest, I can see how these bands are complimentary but I state a preference for Wiltz. Facing's songs are longer, less coherent in places, and just not so much to my taste. Both bands have buckets of talent and you can tell, but Facing's songs are a bit more traditional and definitely what I would see as in the hardcore sound. It just isn't my thing, and their songs are thematically darker after the happy motoring of Wiltz. I find myself losing interest, despite everything, and the screamo-ish shouting puts me off. Sorry chaps, I'm off to the other side of the split again.

Listen to the Witz side here and the Facing side here.