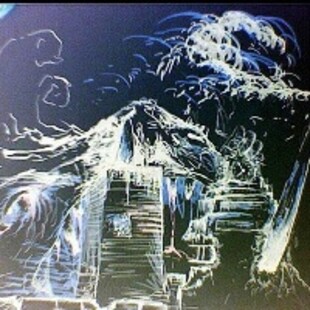 Let us begin. Jupitari. Starting guitars emulating that thing those of us who remember about games on tapes: white noise and digital squeals and beeps. Pulsing guitar loops, then the drums come clattering in over a wobbling bass line, slices and scattershot bits of sounds skittering around. It's coming on like a heavyweight Mogwai track, the bass here dominating with its sheer overdriven roar. There was a hint of a song in there, and the bass dies to more guitar noises and a hi-hat keeping time.

Gold Ghost: Ah, here's the thrash/hardcore/screamo. The pretence of the first track's ambient noodling is dropped in favour shouted lyrics and hammering drums, mathletic guitars chopping back and forth whilst the ever-dominant bass growls in the foreground. If I'm honest it is muddying the sound, all this bass. I'm sure you can get heavy without such muck all over your sound. It's just too overpowering to the point that the sound disintegrates in my ears.

Disclaimer: I'm probably not the best person to advise on this release. Yeah I was all over Refused's Shape Of Punk To Come like all tourists to the hardcore sound, but bar that my interactions with this area of music are circumspect and amateurish. Gold Ghost goes on, alternating between guitar-droning interludes and more hardcore hammering until it dies into a looping weirdness. I think perhaps the recording is too loud, it must be hitting the peaks and clipping badly when it gets up there. But this looping experimentation, hypnotic guitar spirals, it's certainly interesting. I can't say I know many bands who blend such sensibilities as Moths do here.

We move to Transit, a more lethargic affair, guitars echoing delicately over distorted loops and insistent drums. This is more comprehensible to me. Alas, it's the shortest track and over in a rising cycle of distortion before it has really begun. The album is clearly built to segue from track to track, but the nature of the online player puts a pause in there where it should be a smooth transition. We transition into more screamo. My uneducated ears have no idea what might be sung, though the notes say all three musicians - drummer, guitarist and bassist – share vocal duties. I'd like to wave my hands at the guitars here and talk about At The Drive In-esque progressions, but then I'd sound like a terrible pseud. There's a point where one of the guitars sounds like a sequence of broken computers, which is sonically interesting if a little dissonant.

More guitars and shouting and ambient bits on You've Reached Marshall and Asteral. Then pulsing loops, a growingly wave of noise as the transition comes again, moving into Perseids, final track. Scatter of echoing guitar, rising grumbles of bass noise that sounds more synth than axe. We're in for a ten minute epic closer. It wobbles and grumbles and growls, more guitar loops, then the hardcore breaks through, and unfortunately that bass eats into the recording again and pushes half the other sounds out of hearing. Shouty men! SHOUTING! I am uneducated. I am at a loss.

My personal opinion, and let's face it we're all slaves to our preferences and biases, is that this band is trying to oscillate elegantly between hardcore songs and then curious experimental tranches to fill the gaps. Alas, the experiments are messy and mostly meaningless and lack the spark to make them worthy of attention, and the hardcore stuff feels a bit by the numbers from my limited experience. I'd say Moths have the desire to do something interesting but a muddy recording and lack of virtuosity or inspiration cut short their lofty desire to blend and alternate sounds and genres. Just when they start to go somewhere interesting in either side of their sound they get distracted and leap back into the other side in breakdowns and build-ups that lack true shock or clever shifting. There are ideas here, just a lack of expression.

See what you think here.