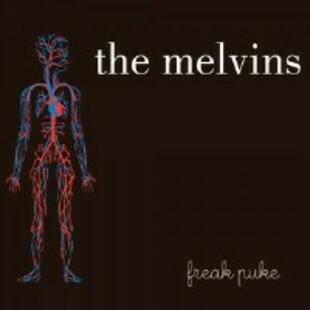 As my recent luck would have it, on the same night I finally get round to listening to the free download Bulls and Bees EP, than I'm asked to review this new album from the mighty Melvins. As the excellent ninehertz review of that EP put it, you love them or hate them - and while I agree with that, and am firmly in the love camp (sounds like a nice place), those who love them have to put up with some frustrating times. Bulls and Bees is good - a pointer to why this band are still important 129 years after they began, still a force to be reckoned with and eschews the frustrating bollocks that can infiltrate their recorded output.

Freak Puke is the new album, and is sans Jared and Coady - Melvins-lite as they seem to be calling themselves here. This is a worry as the Melvins have been revitalised with Big Business in their fold, with output being more structured and stabilised since 2006's A Senile Animal.

Mr Rip Off opens proceedings, beginning with a withering violin scratch noise akin to the sensation of hundreds of insects crawling over your body, Indiana Jones and the Temple of Doom style. It evolves into relaxed chilled Melvins fare, without really going anywhere. Inner Ear Rupture is another violin fuck-around ear-fuck, but this time exists on it's own - pure filler and shit for it. Baby Won't You Weird Me Out again starts with violin, but quickly gets into heavier fare, a nice riff boldening the atmosphere so far thus created. But is soon dissipates, and the song mawdles. A bit of Primus-esque bass piss-about follows and as you can tell there's nowt special to recommend here. Worm Farm Waltz is the first song to grab you from the off. It's almost late-Faith No More-ish, but again the song descends rapidly and frustratingly. Chants and drums bore along before yet more violin rape. A Growing Disgust is the aptly named end of the first half of the album. It's the best so far, the nice dosed Melvins sound, with a nice rolling stoned riff, which wraps around your mind as they often can. Problem is that it's only plautitudiable in reference to what has come before.

Leon vs. the Revolution again flatters to deceive - the first half threating to take you to the rollicking latter-period band output, but without evolving it dissolves into itself. Holy Barbarians just meanders. Child like vocals and a bass strum along. It goes nowhere. The album title-track has to have something, surely - come on Freak Puke! It's got a loose punk feel but ends up sounding like a disposable Desert Sessions track.

Let Me Roll It has a weird free vibe going on, which is no bad thing, but when you're thinking of Kiss in the chorus then there's problems. Tommy Goes Berserk wraps things up, and by now I can't say I'm up for the near ten minutes it asks of the listener. Saying that, it has a nice mellow build up and then an almost Dead Meadows psych-esque trip that is close to endearing. I won't mention the futile noise samples that take up the last minute or two (while doing just that).

I've never written an album review song by song before - the mood and flow of album should be the defining characteristic to write home about. My reason to do it here was because I was so deflated and disillusioned to the collective sound that I needed to check each song by itself to confirm my suspicions; that this is a disappointing, yet oddly inevitable Melvins release that doesn't really deserve investment.