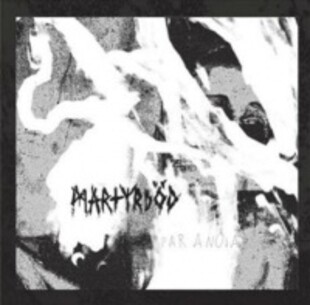 Martyrdöd are a Swedish crust/hardcore band who rip it up more than most.

Thanks to years of touring, their dark, honed craft sounds face-melting in the extreme and no more than on their latest expulsion Paranoia. The guitars ring out like alarms, the vocalist barks like a particuarly hard-done by guard dog and the drums are a blur of motion.

This is somewhat by the numbers crust, think Disfear, Skitsystem and the like, but it does the job. There's far more in the way of solos here than you'd normally find, which adds an element that veers away from the genre's blunt simplicity, which at times can be limiting. There's several layers of dynamics in there too, it's not all full-on intensity, which makes for a great listen.

Lyrics appear to be in Swedish too, so it's anyone's guess what they are annoyed about this time, but the theme seems to be the questioning element of the mind, the almost black metal tone of some of the guitar work on display here creates a maelstrom of sound at some points, giving a closed-in, panic-inducing feeling that perhaps eludes to the title of the record.

Recorded in the same studio that Opeth frequent, there is a gloss to this album that wasn't there on previous albums. Before, Martyrdöd were a stereotypical no frills crust band, preferring to record using battered mics and with a lot more roughness that suited their sound. However, being able to seperate the instruments here has revealed an intricacy that may previously have been hidden. Guitars no longer sound like a homogenous swarm of riled-up bees, but still create that wall of sound you need when attempting anything that even strays close to black metal. I do like it when bands approach recording differently for different releases and this is a prime example of how to do it right. That is to say by not comprimising your style or being overly reverent to newer, more opulent surroundings. Obviously these are the benefits of being on Southern Lord, a label who can afford to pay for plush recording sessions.

This is not a bolt from the blue in terms of sound, but for those who appreciate some blackened crust, you simply cannot go wrong with Martyrdöd.