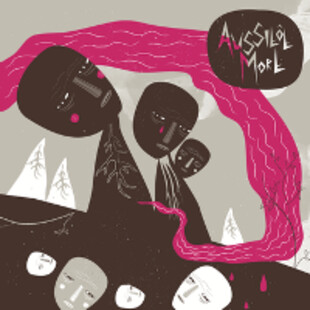 Seems far too late to review this, but frankly, more people need to know about this band.

Aussitôt Mort released this on Christmas Eve last year, but it's been burning a hole in my conciousness since. It has what makes 90s screamo so good even a decade after it was popular. The carefully picked melodies, the sense of knife-edge danger it harbours, the sheer fist-in-the-air riffage. Aussitôt Mort just do it so well, the impassioned vocals, delivered in their native French make even screaming seem poetic. I remember hearing their demo in 2006 and at that time, listening to the cavalcade of screamo bands from Europe that seemed to all appear at once and marking them down as one of the best, alongside Daitro and La Quiete.

If you like long, post-rock infused sections of quiet along with the cathartic tar and feather-like blasts too, this is the kind of music for you. This two-track LP has two near-10 minute tracks to digest with a beautiful painted opposite side of vinyl. To many, this would seem like a sad waste of wax, but the tracks are of such a quality that you can forgive our Gallic brethren this time.

The title track roves its way from winding, intricate sections to full on frenetic distortion fests with the blink of an eye, taking you on a journey that most bands would greedily use the entire side of the LP for.

With accompanying track Sur Un Radeau, Des Cannibales they build up the tension to torture rack levels before letting feedback and digital bleeping take over briefly, even a piano, detuned and distant, plonks out a sad refrain, before allowing the band to crash back in with aplomb much later on. Some of it reminds me of the excellent Army of Flying Robots and their track Embodiment where they finally took their feet off the pedal and allowed some space into their clashing, thrashing grind sound.

This is one that would be worth a dig around for the actual record, vinyl should be an event and Aussitôt Mort have created one. Listen to it here.