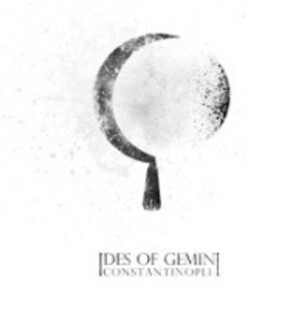 Ides of Gemini occupy a pigeonhole that is so free of other pigeons, there's been no sign of feathers there before.

Neurot recordings have snapped up this truly unique band, but is it any good? Apparently folk have called it 'dream doom' which is about as terrible a term as you could wish for surely? Anyway, that has made it into their marketing material, but they fare a little better than that label would suggest.

Part folk vocal techniques, part a lighter, more airy My Dying Bride, Ides of Gemini are a whispy, floating three-piece, made up of vocalist/bassist Sera Timms, who commands a throaty roar and a haunting singing voice, alongside rock journalist J.Bennett (Terrorizer, Decibel and others) and drummer Kelly Johnston who adds milatristic flourishes to the percussion. This gives the whole affair a fleet-like majesty, you can imagine a giant floatilla slowly moving towards you with impunity, this band leading the charge on a lone craft.

It's got hints of the medieval about it, the vocals of Sera combine with Kelly's backing vocals to create an almost Siren-like sound, while Bennett's guitars peel away in their own world beneath. the only criticism one might level at their sure-but-steady progress throughout Constantinople' is the lack of pace, and therefore interest beyond a few tracks. If going for the shoegaze crowd, there's not enough bass at work to give it that trance-like feel, for the doom crowd, it never reaches those depths of feeling or sonic attack that genre needs, nay, demands.

Those who dig the Cocteau Twins and trad-doom may get a kick out of this, it's rather epic all told, but lacks the ability to bring you back for multiple listens. The lyrics seem to focus on the afterlife and reincarnation, but moves at such a comely pace, you can often forget what was happening earlier on. Neurot have a knack of signing bands that split opnion though, see Made Out Of Babies for example. See what you think, 'dream doom' might take off and this reviewer will be eating value cornflakes for the rest of time to his shame, you watch.