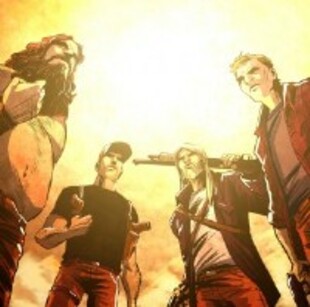 There's something about stoner rock music from the capital, it's always been of a great quality, taking nods from the classic bands of the genre it always somehow manages to hit home.

Steak are a four-piece obviously keen on their Kyuss, Colour Haze and Dozer and are ploughing the same furrow we've gotten used to since the 90s. This is no bad thing of course, it's great that bands are still keeping the genre rolling in new directions, but if the genre itself is rather limiting, what can be done to stand out?

On first listen, this new EP Disastronaught' could have been released in 1998 and for the most part, could have sounded exactly the same, but there's something more spaced-out and nihilistic here than simply singing about muscle cars, deserts and weed here. The lyrics are pretty catchy as it happens, seeming to be more personal than the average stoner rock cliche wagon-riders. Also not conforming to cliches is the cover art, done in the style of a comic, it paints the members of Steak as superheroes of sorts and looks to these eyes like the recent unusual cel-shaded videogame Borderlands, the unusual combination of hyper-real and comic'd up stylistics means it sticks in the mind long after you see it. Perhaps if a comic was included (even better if it made it to vinyl) this could be a great packaging option the band could capitalise on. People appreciate a decent effort when it comes to music ephemera, collectors seem to salivate over inserts for years after too.

A mention must be made too, of the production, the overdriven bass and guitar chime together to produce a well-endowed sound that belies just four members, it sounds like some unholy ensemble of guitars all playing together. The vocals are also really strong, I'd hazard a comparison at long-lost UK stoner rock legends Khang, whose vocalist went on to front 9hz faves Threads. The throaty, but tuneful patter of singer Kippa's voice is also sometimes overdriven to create a sandpaper-rough effect that lift certain elements of the songs way above the norm.

Listen to Steak if you find you are becoming jaded with our old friend stoner rock, you'll start to see why it's still as valuable a genre as any. Dismissed by some as a flash in the pan musical style, Steak have proved here it is alive and well.