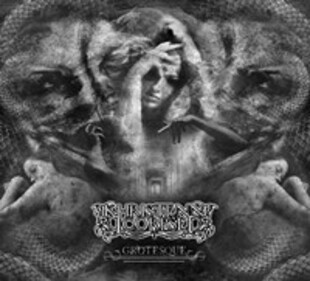 This must be the weirdest release we've been sent in a while, a Venezuelan black metal band who have a fixation with erotica?

As weird as that sounds, it doesn't sound that terrible, save for the teenage virgin song titles, 'Eroticult Goreholocaust' for example, this is quite melodic, all keyboards leading Immortal and Fintroll-ish black metal attack. Complete with Popeye-on-downers vocals and some excellent blastbeats.

Where I'm not so keen is what sounds like nazi war tunes intersecting that aforementioned song title. The lyrics are either in another language or in barked, incomprehensible English so I'm not sure of the content, but given the mindset, I can't be sure whether it's for right wing sympathisers or outright condemnation. How you would come across this album other than seeking it out is anyone's guess given the obscurity, but I'm happy to let it fester in some loner's bedroom among the manuals for making cherry bombs and 'ironic' copies of Mein Kampf thanks.

This is where this review will end, hopefully this won't mean my house being burned down or the site being invaded by rabid black metal fans. I appreciate the genre, but not the sometimes vile way it turns.