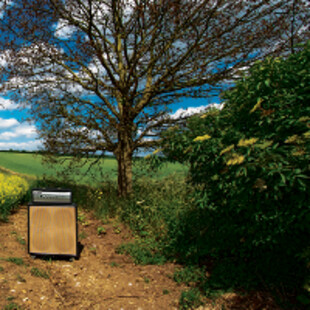 Already the subject of much excitement on the listening thread of the Ninehertz forum, the debut album from Stubb feels like something of an event. Having impressed with live performances over the last few years, this album was hotly anticipated and I’m pleased to report it’s quite a beauty.

Luxuriously packaged in a full colour gatefold sleeve, the vinyl edition of this album is the perfect medium for the sounds contained within. The music harks back to the late 60s / early 70s heyday of the power trio; the vinyl therefore adds a sweet taste of authenticity to proceedings. The pastoral photograph gracing the cover gives little away regarding the contents (not even the band’s name- an odd decision as it could easily lead to folks missing it in record shops/ distro stalls at gigs). Only the vintage Thor amp and what looks to me like a de-badged Sound City cab hinting at the music waiting to be experienced inside. The gatefold’s inner photo montage displays some of the tasty hardware at use among the usual band on the road/ in the studio pics. Not so sure about the curious endorsement of the hideous German soft drink Schwip Schwap though.

Road kicks off proceedings with an exhilarating up-tempo wall of sound, bringing Jack Dickinson’s Hendrix flavoured wah-stylings to the fore. Although the tastefully fuzzed riffing and regular lead guitar breaks are at the front and centre of proceedings , this is more than just a showcase for the lead work; Chris West’s energising drums master the fine balance between solid beat keeping and accentuating fills, whilst the immense bass tone anchors proceedings with more balls and guts than a pie factory. Even the singing uncovers unexpected treats with the vocal doodle-dos following the guitar pattern in this song standing out for noteworthy approval.

This opener sets a high-scoring precedent which is successfully carried throughout the eight tracks of the album. As the tempos vary from pacy rockers to soulful and measured blues workouts via mid-tempo stomp, this is never anything less than captivating, superbly executed, classy rock music.

There’s no avoiding the classic roots of the music but it’s fresh sounding and avoids the trap of seeming dated. The spirit of power trios such as the aforementioned Hendrix’s Experience, Cream, Groundhogs and their ilk is hard to ignore but there’s an energy to tracks like 'Soul Mover' and 'Hard Hearted Woman' that dismisses any concerns of this being merely retro for revivalists of a bygone era. This is the sound of a band enjoying the hell out of playing loud rock music, going for it and shitting out nuggets of gold on the way.

The production work of Part Chimp’s Tim Cedar and mixing/ mastering of Stone Axe’s Tony Reed are a real bonus here, allowing the three-piece interplay to really shine; all the instruments work well in complimenting each other at the same time as rewarding individual attention. Everything sounds loud but clear and urges the listener to tweak up the volume just a few extra notches.

The interaction between Jack’s lead vocals and the back ups of Trippy Wicked singer and Stubb bassman Pete Holland adds another layer to the Stubb sound, particularly on the stomping rock of second number 'Scale The Mountain', reminding me of the Bruce/ Clapton dynamic in Cream. The heavy riffing is sweetened by the vocal melodies, making this accessible to listeners who would normally avoid the fuzzed out excesses and vocal histrionics of much of the stoner/ psych genre.

The whole album is densely populated with lead solos and licks which have the rare ability to excite and add character to the songs as a whole rather than hollow showboating. You can really hear the exuberance of the band emanating from this slab of wax as it goes about its commendable 33rpm business.

Amongst the fuzz and fretboard wizardry, there’s a catchiness and distictive quality to the songs, hooking them into the memory ready to pop up out of the blue. I’ve found myself with many an earworm spawned from this record whilst out and about, leading me to have a semi-permanent ‘must listen to the Stubb album’ state of mind in the last few weeks.

Whereas their contemporaries and touring partners Stone Axe gain instant recognition with a nod and a wink by means of riffs and hooks which unashamedly recall Free, Lizzy or DC, Stubb evoke the spirit of their influences without overtly mimicking them (OK , maybe a bit of the Jimi worship borders on simulation, but it‘s done better than the likes of loony Frank Marino). Hints of the aforementioned Hendrix and Cream come thick and fast, although the spirit of Thin Lizzy era Gary Moore comes through on the clean heartache of 'Crying River' and the ballsy thump of Leslie West on the earth shaking pounder 'Galloping Horses'.

This would be a great record to play for jaded oldies who think that today’s music has nothing to offer to the classic rock fan; I can think of a few who would never pass the Pepsi challenge on this!

As well as the 60s/ 70s reference points, the up-tempo fuzzed out groove of Soul Mover brings to mind a previous generation of updated 60s homage; the early work of Mudhoney. As with the Seattle standard bearers, this track achieves the same balance between the killer guitar tone of Blue Cheer and the adrenalin rush of Punk’s amphetamine thrills; it would sit happily on either of the first two Mudhoney albums alongside the likes of In And Out Of Grace or Here Comes Sickness.

Closing track 'Crosses You Bear' acts a neat epilogue to the preceding rock and blues workouts. A brief acoustic tale of loss, this again recalls past classics where delicate moments sat happily alongside monstrous riff work- think 'Black Mountain Side' on Led Zep 1 or 'Orchid' on Master of Reality. Lovely stuff. As the needle makes its way along the run out groove, the concise (approximately 35 minutes) running time encourages me to spin the disc over and start it all again- a rare occurrence for me these days and a testament to the quality of the songs on offer.

Before wrapping things up, I’ll just acknowledge the elephant in the room grinning at me and swaying his trunk in rock fuelled abandon; this record is the work of Ninehertz regulars. It’s time to take the stand and swear the oath of objectivity….

Other than occasionally crossing paths on this site’s forum pages and offering quick congrats after their recent performance in Birmingham when I picked up this slice of vinyl I have no link with the band. So, hand on heart, I can honestly say my approval this album is the result of genuine appreciation of the music, not any kind of back- slapping ‘buddy bias‘.

It’s going to take a monumental effort to beat this for the prize of best British rock album of the year. Be proud of your work gents, this is one to tell the grandchildren about.