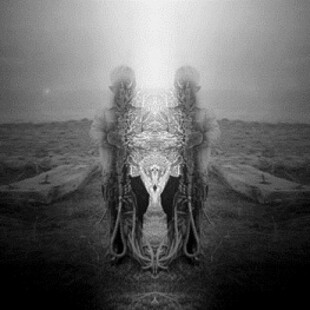 Post-metal, when done well, can hold you emotionally, take over and dictate your mood. The quiet build ups send you into positive introspection, and the inevitable release into the heavy riff a glowing release from your thoughts. At it's best, post-metal can grip you from start to finish, take you away, mind and soul, and give you a warm glow.

Cyclopian do well to near this on 'Radiant Sea', the fourth and penultimate track on their self titled album. Tidal sounds accompany the nice slow build up, reminiscent of Una Corda. A controlled release into genre-stereotyped gruff vocals and riff is measured by a nice use of sample (thankfully sparingly used on the album) and when focussed I can give myself momentarily over to the song - I can have it on through my earphones and get lost in thought, inspired by the music, not despite of it.

Sadly this is the exception on the album and even that only found through repeat listens due to reviewing duties - although to be fair all post-metal requires several visits before it "reveals" itself.

'Cyclopian', to be harsh, is by the numbers - quiet and loud, growl vocals, "layers". All present and correct, with nothing to differentiate from the genre's holy trinity of 'Oceanic', 'Australasia' and 'The Beyond' - all released within 14 months of each other tellingly nearly a decade ago. Add in Neurosis, who transcend the genre they inadvertently created, and the influences are there in those trio of brilliant albums, yet with no new angle to make an impression.

It's not like the UK underground missed out on the, largely American (and Swedish), phenomenon either. Isis copyists cropped up around Leeds and other hardcore/metal strongholds, and the likes of Bossk, Manatees and Flatlands took on the mantle many years ago, and tweaked, developed and evolved it in their own image through musical expansion, experience and touring, to more accomplished effect. Interestingly the latter of those three are evoked here through the grey tone artwork and band logo.

This is by no means bad - it 'sounds' fantastic, aided by a stunning Chris Fielding/Foel Studios production. It will be no doubt amazing live, in the right setting (ideally a small venue with a good sound system). But it is too by the book, without the essential envelop of emotional grip that this music should inspire at it's best.