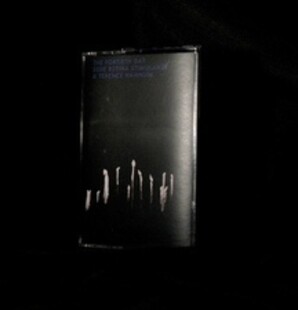 This release marks a rare, one-time only, collaboration between three factions and sounds that way.

A project recording that took place late at night at WLUW on Loyola University campus for a radio show called 'Something Else' in November 2009.

The Fortieth Day are a Chicagoan duo, Mark Solotroff and Isidro Reyes (also of influential power-electronics group Bloodyminded). Sshe Sshe Retina Stimulants is the moniker of Paolo Bandera, a founding member of Sigillum and Terence Hannum appears under his own name.

What is on offer is an alternating cauldron of subtle, soft drones and field recordings of machines whirring and what sounds like trains pulling into stations as well as more conventional feedback workouts. The effects sometimes blur into nothingness, only to come back and haunt with ghosts of echoes being replayed and sounds lurch towards you like gap-toothed tramps in the city.

It's both mysterious and overwhelming at the same time and you can feel there is a hell of a lot of collaberative energy being pooled here, nothing strikes it's own path, it buzzes together like a cloud of flies. More going on than you first suspect, it's not an easy listen, but you should probably give it a go.

Buy it here, from the Land of Decay label.