Painted Caves Not Here Not There 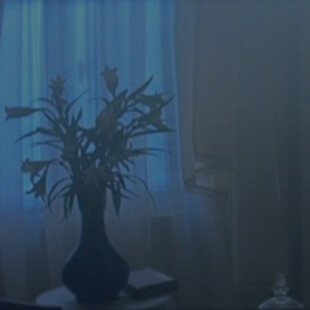 Ninehertz boss Mike always throws in a little joke when he sends stuff for review. With this one, he informed me Painted Caves contained "one half of the band 'Barn Owl'". Like there's really a band called 'Barn Owl'. Nice try, but I'm not stoopid enough to fall for that one. He also told me it was 'droney' which is also hilarious as he knows my views on drone music perfectly well after the years we've known each other. (I think it's bollocks visible from space).

In fact, it turns out to be largely ambient, the less pretentious flatmate of drone. Brian Eno described ambient music in the following terms; "Ambient Music must be able to accommodate many levels of listening attention without enforcing one in particular; it must be as ignorable as it is interesting," and Painted Caves certainly manage this. The 3 tracks that make up this release are fascinating in their lack of song structure and rhythm. Breaking the songs down into their various components, the ways in which they change throughout the song almost seems random. Focus on any one aspect looking for a pattern and it's likely everything around it will have shifted slightly while your attention was elsewhere. Unfortunately, the nature of ambient music means that in overall terms, this has little effect on the track as a whole.

Only first track 'Between Worlds' has anything resembling traditional musical instruments with a heavily reverbed guitar and sparse, low mixed percussion. The rest of the instrumentation is largely dealt with by electronic sounds, glacial synth pads and pulsing drone notes, and everything is covered in a healthy layer of digital reverb creating an otherworldy feel.

My initial listen didn't tell me what I already didn't know about the genre, that being that I could probably knock some passable ambient music up on my computer in an afternoon, and that trying to do anything else other than listening resulted in forgetting that there was even music playing. A more focused listen through headphones yielded better results, and I found myself genuinely interested in the formless nature of the music and the thought processes behind creating it. While I can't say I'm now an ambient devotee, the approach to music that differs so much from most of what I, and probably others, are so familiar with makes this release well worth 20 uninterrupted minutes of your time. It might not blown your mind, but it might expand it a little.

Forums - Reviews and Articles - Painted Caves - Not Here Not There