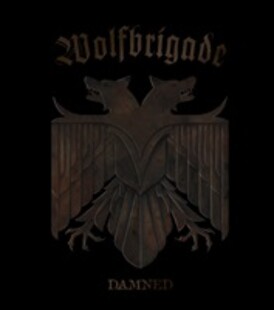 Sweden's legendary d-beat stalwarts are back with a new album and it's as raging as you'd expect.

With a fifteen-year history, Wolfbrigade are a band who have seen and done it all. Once named Wolfpack, they have been a presence for years, albeit with small gaps for hiatuses and periods of no activity and are generally respected as scene mainstays.

Their sound is as full-on as ever, a frenetic, spitting, whirlwind of d-beat played at a million miles an hour and with vocals that bring to mind a more hate-filled Jaz Coleman of Killing Joke. Although the vocals are agressively screamed out in a deep, guttural way, you can still hear what is being said and although it's stuff we've heard over and over again, social injustice, slavery and a sense of injustice, it still sounds new and all-encompassing. At times, he sounds like a dog, barking out a warning, but it's still decipherable, which is a welcome change, a particular highlight is the fantastic 'Hurricane Veins'.

The music rings with the incessant buzz of black metal and the clatter and anger of hardcore, but is perhaps a great example of the Swedish sound, performed by some of the genre's original figureheads.

As the record skitters along, I'd argue there is also a classic metal influence in there too, there's some incredibly deft leads that remind you of 80s metal material and the production lets each guitarist shine, almost giving them 'turns' a la Slayer et al. This can only be a good thing, it's unusual to get an album that faces both the past and the future of the genre, so kudos for that.

This might be a good introduction to the genre for those unfamiliar, it's accessible as well as fully challenging, having a lot more under its surface than you first hear.