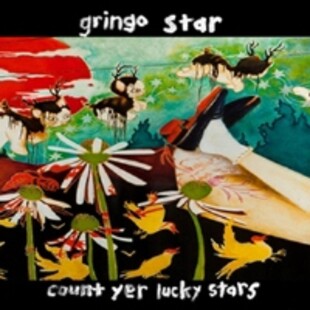 This is nice isn't it? A surf-rock inspired bit of pleasantness from Atlanta, Georgia.

Apparently this is Gringo Star's second album, their debut 'All Y'all' got them signed to their current label Gigantic.

What's on offer here is a fairly middle of the road take on alt-rock with a flowery, summery vibe not dissimilar to recent success story Beach House, that dreamy, faraway sound comes into play. If you imagine the Beach Boys with a more country-esque twang and a bit more distortion, that's the general ball park here.

There's some 60s vibes from elsewhere on display too, for example, the spirit of Bob Dylan or even Roy Orbison are prevalent on songs like 'Beatnik Angel Geogie' and closer 'Mexican Coma'.

You can imagine this band plonking away in a hot, lively bar somewhere and adding to the atmosphere of long summer nights and barbecues. It's all quite relaxed and even when they pick up the pace, it rarely gets your heartbeat above a steady beat, which is great, sometimes we need music that relaxes as well as stirs the soul and this has that laid-back psychology all over it.

The shimmering production opens up the backing vocals and gives the whole affair that likeable sheen that will appeal to not only the stoner rock obsessive within you, but will also tugs at those nostalgic heartstrings too.