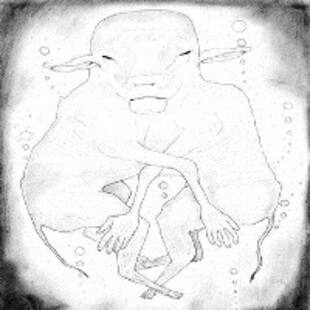 Ah, the split release. Your band has written some reyt bangin choons you want the public to hear, and as for releasing them on a split? Well, for various reasons, not least of all financial, it's almost obligatory for smaller bands. But who do you pick to share release space with? Silent Front went for a band pretty much the opposite end of the heavy musical spectrum to them, A Clean Kitchen is a Happy Kitchen.

Silent Front can probably best be described as angular punk, blasting out 2 tracks around the 3 minute mark. But whereas the term 'punk' implies a certain amount of simplicity in song structure, there's a lot more going on here. There's much more of a groove based approach to a lot of their riffs and a few odd time changes. Think 'Jesus Lizard' rather than conventional punk. Both tracks are full on from beginning to end and could do with a little more room. Oddly, there was a lot more dynamic changes in the material on their 'Dead Lake' album which is missing from these tracks but it's impressive stuff anyway.

On the flip side (if you bought the vinyl), A Clean Kitchen... sit more in the improvised jam field, probably looking up at the sky whilst on drugs. Their contribution is a single track, the 8 minute 20 'Molasses for the Masses', a slow builder starting with some early Mars Volta style guitar soloing over a backdrop of gurgling synths which builds up and all gets a bit obvious for a good few minutes. The guitar soloing continues and everything else gets more and more busy, until around 6:25 when the drums and bass suddenly drops into a syncopated rhythm and the guitar introduces some very unusual playing. The whole thing suddenly sounds less like improvisation and a lot more interesting, but it's a little too late into the track by that stage.

So, one tightly structured, quick and to the point band and one jam band who thankfully drop some organisation into the extended chaos. I was impressed enough by Silent Front to listen to their other online releases while typing this review up, but couldn't muster up the enthusiasm to track down any more A Clean Kitchen... material. As always, you the people of internet land can listen to the whole thing and make up your own minds.