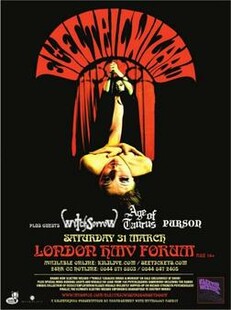 Ten years of seeing live music encompasses plenty of shifts in one’s own tastes. Sometimes a band you’ve never quite ‘got’ for years become a sudden obsession. Some bands you retain the same level of feeling about. And then there are the bands who were your favourites when younger, and you’d never thought you’d grow out of them, but a decade later their records lie unplayed on the shelf for months.

Electric Wizard, for me, have fallen into the latter category. When I first got into the doom and stoner scene at 16 years old, they were a key band. I quickly grew infatuated with their Sabbath-on-bad-acid sounds. For me, there was none more heavy. No other band in the scene gave me quite the same kick as Come My Fanatics… or Dopethrone did. After Sabbath, they were the next best thing for sheer monolithic riffage brilliance. My dad still maintains his ban on letting their albums anywhere near his hi-fi system.

They were also one of the first bands I saw live, back in 2002, not long before the original three-piece line-up split. That was at the Camden Underworld, an enjoyably intimate venue but the limit of success most bands on the doom scene seem to reach. Ten years on and Jus Oborn now leads his band to headline the Kentish Town Forum up the road. For a band with such a defiantly un-commercial attitude and sound, who have pushed the boundaries when it comes to what the words ‘heavy music’ mean, it’s a remarkable progression and encouraging to witness.

But bands as well as tastes change over time [unless they’re AC/DC or Motorhead]. Sometimes for the better, sometimes not. Sometimes a band can move on to a sound that’s equally enjoyable but different from their older style. The shift from being a three-piece to a four-piece, two-guitar band has over the past eight years or so created an Electric Wizard with a noticeably different vibe to the anarchic, tripped-out days of the late 90s. Less chaotic, more focused. But somehow not the same as they were when I first knew them.

And as I grew older, the Wizard albums stayed on the shelf more and more, replaced in the stereo by other obsessions. I enjoyed 2004’s We Live a fair bit, and the comeback British show in Manchester the following year [reviewed elsewhere on this website] was superb. But although I bought Witchcult Today when it came out in 2007, I only listened to it once. And I didn’t buy Black Masses at all when it was released a couple of years ago. Perhaps something about the new line-up didn’t grab me, perhaps it was other things. By then I’d stopped being only into doom. I realised that music didn’t have to be heavy enough to make the speakers sink into the floorboards, it didn’t have to stick to the Sabbath template, for me to enjoy and love it. Thrash and trad HM were finally clicking with me. I developed a love of Thin Lizzy. But whichever way, my tastes and horizons broadened. And Electric Wizard didn’t seem quite as important any more.

Tonight’s gig, however, is an opportunity to re-connect. There are three support bands, but I don’t really bother with the first two so buy the new EW 7” [titled ‘Legalise Drugs and Murder’] from the merch stall instead. Witchsorrow, however, are a different case and it’s absolutely brilliant to see them play such a prestigious slot. They don’t disappoint. Over the years their sound has grown tighter and more professional, the band are more focused. Possibly in places their Sabbath-worship meets trad metal is a little too obvious, but it doesn’t matter if a band isn’t that original in the style of music they play, what does matter is that they can do their own take on it and can write good songs, which is definitely the case here. Witchsorrow only play four or five numbers but all of them are interesting, have decent riffs and are worthy headbanging material. Nick doesn’t have the world’s best singing voice but it’s entirely appropriate for the music, which is what matters. Also, as some lengthy instrumental passages show, his soloing has reached a very good standard and is immensely enjoyable to hear.

Although they’re introducing new material into their set, my favourite song of theirs is still one from their debut [I can’t remember the title, though I think it might be called ‘The Agony] which seems to be a fixture in their set and for me is always the highlight of their show. It seems to have become their anthem. They close with it here and it’s great, Sabbath-worship maybe but it’s memorable and has a great lyrical melody. The crowd like the set which is a good sign.

An even better sign, though, is the crowd for Electric Wizard. I was worried the venue wouldn’t totally fill up but downstairs is packed and the balcony where I’m sitting has a healthy complement of people too. After an intro tape of horror film-style music, Jus Oborn and Liz Buckingham, together with newly-recruited drummer and bassist, arrive onstage to loud cheers. Then they open with Supercoven. It builds and builds for a couple of minutes, creeping up, getting a little louder, a little heavier each time. I’m starting to wonder where the real heaviness is though, the loudness….. and then I don’t, because the song shifts gear, the guitars go up and WHAM, we’re off. It’s loud, very loud, and it just gets more and more intense. As with Witchsorrow, the Wizard don’t boast a technically brilliant vocalist, but Oborn’s tortured groaning scream fits the music brilliantly. After about 5 minutes the song changes gears again, and shifts into a faster groove that goes on and on and on, absolutely pulverising the audience, the guitars roaring and psychedelic solos finding a way through the wall of noise coming from the stage.

Electric Wizard nowadays are not as anarchic, they are definitely tighter, closer to straight-ahead heavy rock than whacked-out voyages. They come across now as being closer to a 60s/70s rock band but about a thousand times heavier. This is something of an issue for me when they play the older songs, as part of the appeal of that music was the loose, barely holding on vibe. Now they are a much more disciplined band and the tripping, more relaxed but still out-there insane intensity of the older songs has gone to a degree when they play them. It is a very different band in some ways. I’m impressed by the rhythm section but miss the unique, almost jazz-like playing of the original drummer Mark Greening, who was a key component of the old sound. And yet, part of me is wondering if the original line-up would have made it to this level. The more conventional style the band play now seems to have connected with more people.

Not that it matters, really, because watching this new line-up is like watching a steam hammer. It is relentless, pounding, BRILLIANT heavy metal with a cornucopia of Sabbath style riffs. And the crowd respond to it wildly. Dopethrone is received rapturously, but the highlight for me is Return Trip. Although it’s played more conventionally, it’s stupendous, absolutely staggering, the riffage just levelling everything in its path going on and on and on, you don’t want it to end. Sadly it’s the only song from their finest hour, 1996’s Come My Fanatics… album played tonight, but it’s great to hear it all the same and I’ve always found previous live renditions of it a little underwhelming at times, so it’s great to hear it nailed like this.

After this comes a string of newer songs. I’m not really as familiar with these but they’re brilliant, especially the song Black Mass, where the chorus just seems like an ascending spiral, going up and up, pushing the crowd’s heads into the trip. There is one thing that has not changed about the band and that is the hypnotic effect most of these songs have. I find it is almost like a trance. Especially with the projections going on during the show. EW have borrowed Hawkwind’s projection set and there are plenty of weird effects and patterns dancing on the wall behind them, but the real appeal is the string of clips from various obscure 60s and 70s horror films which are playing in the background. I don’t know any of these films or how the band found them but they are very out there. Satanic rituals, drug taking, cults, rites, sex, and biker gangs all play out on the screen behind the band. The music fits perfectly. Most of the time I’m watching the projections and letting the music be a soundtrack to them. I remember while ago Oborn once said he wanted to do soundtrack music for horror films. This statement seems close to a realisation tonight. The projections are chosen to match the lyrical concepts of the songs, and they work very well. It’s a look into the undertow of the dark side which is unnerving, but it is what makes this gig a truly memorable one.

The set eventually comes to an end. But there is one more song to play… Funeralopolis. This song has probably the greatest riff of all time and it is very suited to the more conventional style Electric Wizard play in nowadays. The riffage uncoils from the PA and levels the crowd. The projections change too, images of war, genocide, violence, dictators now appear on the screen. The song shifts gears and goes into a pounding, insane, intense repetition, one fast riff driving you into the floor.

This world is so fucked, let’s end it tonight”

screams Oborn as behind the projections change to atomic explosions, missile launches, blast waves. The ferocity of the music is unreal, and it goes on and on and on, until the song finally finishes in howling feedback, collapsing into chaos, the audience pummelled.

This was a superb gig, one of the best Electric Wizard shows I’ve seen out of the seven attended over the years. The fact that music of this intensity and darkness was filling a venue of this size is the amazing thing. On the basis of tonight, one can only hope the Wizard keep continuing on this path. I don’t know if I’ll ever quite feel the connection to this band that I had when I was 17 again, as I’ve changed and so have they. And part of me still misses the unique vibe the original three-piece line up had. I guess I regret the fact that in some ways, the original band was ‘my’ band in a way – I identified with them and their music. I still see Electric Wizard pre and post 2002 as two different bands to a large extent. This is something new and different to what came before. But despite the differences, they are still an excellent band, the second incarnation have been going as long at the first one, they play great doom metal and put on a stupendous live show. And I’m going to buy a copy of Black Masses sooner rather than later after tonight.