Weak Teeth What A Plague You Are 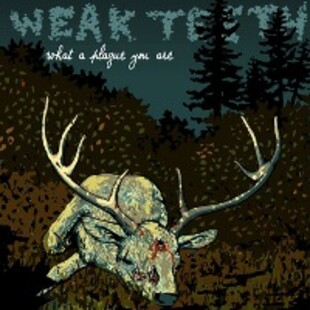 This is a raging slab of screamo from Providence, Rhode Island.

All angular jangling and blastbeats with intense lyrics and vocals, it's all very mid-to-late 90s, which can only be a good thing. The vocals are sometimes backed up, giving it a sound very similar to Circle Takes The Square, just not as fast or complex.

That's not to say the structures here are simple, the songs rarely push over a minute, but what they pack into each track is impressive. If you know bands like La Quiete, Daitro, City of Caterpillar et al, you'll love this, if you haven't checked those bands out, why not?

The only cringeworthy aspect is the lyrics, sure proper screamo wears its heart on its sleeve, but there's a line between honesty and outright whining, while every line is delivered with rage and conviction, words like: 'It must be so fulfilling/To know that everyone is wrong/If this is progress/Then i don’t want to live life anymore' is a little trite and teenage. That said, they aren't the worst offenders of this kind, there are plenty of bands who have released far milkier lyrics before (see The Kodan Armada's song 'iwishididn'thatemyself.com for true self pity).

This is good for a bit of stress relief, even the epic closer 'Blue Skies, Shit Life' manages to do the extended acapella group shouts thing with some conviction and sounds great. This would be a good intro to those not familiar with the vast swathe of 90s bands, whose influences are manifest within this new band.

Forums - Reviews and Articles - Weak Teeth - What A Plague You Are