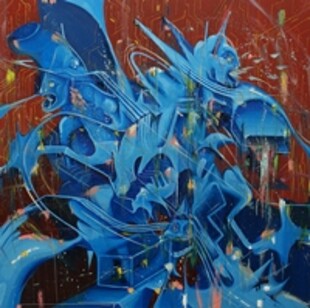 With a fantastic name and an even more fantastic album cover (just look at it!) Flies Are Spies From Hell are a truly unique proposition.

Being instrumental and on a label which almost deals uniquely with non-vocalised music, what do FASFH do to seperate themselves from one of the most overcrowded genres ever?

Well, quite a bit actually, giving precedence to piano/keys on most of the tunes on offer here means they have a more accomplished and deeper sound to their drawn-out musings. Similar in scope to Leeds titans These Monsters (minus the sax) they build the stark, mournful passages of carefully-picked notes with the spine-tingling crescendo to a level that is almost on a par with the effortless heaviness of Mogwai at their loudest or even Japanese doomsters Corrupted (if you can believe that of a post rock band).

The use of piano gives it a classic edge, which cuts through the distortion to give some clarity to the proceedings you are simply not able to get from guitar strings alone.

This release comes with three new tracks and three remixes, the first, a remix of 'Wallow In Threat' by Court of Hidden Faces reduces the sound to a glacial and trebly smear, like one voice just singing one note, ethereal and ghostly.

The Gunning For Tamar remix of 'Great Deadener' sounds like 'Rounds'-era Four Tet, all staccato stabs of twinkly high end with a piano-led background, it sounds digital but retains some warmth through the original instrumentation.

The last remix on offer is from Field Records boss and if I'm right in thinking, former Ann Arbor chap Tim Waterfield, who for several years has been going under the name Karhide. His remix is a dark and almost drum and bass infused effort, leaving the music largely intact, he adds a layer of electronic fuzz a la Jesu and some subtle beats, giving it a crowded, claustrophobic feel.

The band are playing lots of live dates at the moment, so try and catch them, epic is the word.