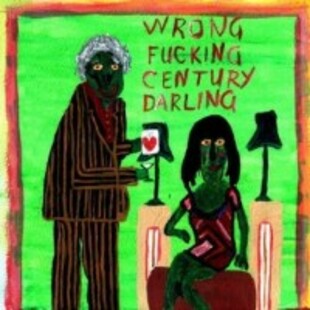 I love the freedom of creativity Scottish bands seem to embrace, I've so far never come across a crap Scottish band (although I'm sure they exist) and The Wrong Boyfriends just add to this view.

From the quirky and quaint artwork, which features some crudely-daubed characters making polite conversation, to the rag-tag music on offer, it's all of a unique disposition and has it's own identity.

The band, currently a 3-piece, play a tangle of no-wave, post punk and almost a countryish vibe. This sounds like it was recorded in an oak-panelled drawing room, the drums crash over a scratchy guitar sound as lyrics about loose women (not the awful TV show), boats and who knows what else are delivered in an alternatively dour and impassioned way.

There are some frankly hilarious lyrics hidden in there, at one point the vocalist proclaims depositing his 'load' in someones ear, but it doesn't come across as puerile as that sounds, which is surely an achievement?

This is an album for those who like their post-punk sinewy and bluesy, but with a sense of humour, if you are familiar with bands such as Shield Your Eyes or Bilge Pump, this is a very Scottish take on that sound, if not, then investigate for some wilfully odd music, delivered as only our friends north of the border can muster.

Strangely, they are on the same label (Kovorox Sound) as wild noise bloke Kylie Minoise, which gives you an idea of how varied that label is, delve into their roster for some equally mind-blowing stuff.

Listen to the release here.