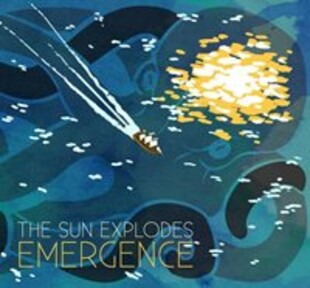 If ever there were a case of overegging the pudding, this album is it.

From the opening orchestral swathes of strings, epic is the word to describe what you think the album is going to sound like. It's all very Muse, thinking BIG and adding track on track of backing vocals to make this sound LARGE.

Quite what happens after is a mystery to me, I spent more time exclaiming 'What?!' out loud than enjoying this. From the cringeworthy vocals (think all of your AOR nightmares come to life) the constant shifting of speed and tone and a production job that sounds like they recorded it in some horrific wipe-clean future, this is just too much.

The band seem to crash on and on, one moment they want to be stadium-filling, anthemic metal, the next a high-speed euro metal warble-o-thon. The vocals soar from Americanised indetikit cliches to painful high pitched notes that fit neither the bands general sound or my hearing range, dogs may well get a whole load out of this. On the Americanisms, can rock/metal/whatever vocalists PLEASE stop trying to sound like they are from New York or wherever, be proud of your own accent, if you are passionate enough, your accent does not matter.

This is metal if Simon Cowell ever got bored of plugging his synthetic pop wares and started filling 02 Academies with 'heavy stuff' instead.

Avoid, if not for my sake, then your ears, your speakers, your neighbours, your dog for that matter.

Also features the god-awful Cher-like stylings of auto-tuned vocals in parts, which says enough about this band by its existence alone.