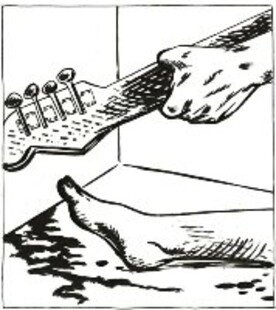 As you'd expect from that selection of talent, it's pretty damn good, part surf-rock, part snotty 70s punk, its simple, powerful and just a lot of fun.

It's not just three-chord nonsense either, each tune fires into something new, but they all share a sense of speed and to-the-point purpose.

Singer Keith Morris has a Jello Biafra-style vibrato at points and his vocals recall all that's great about the Americanised punk sound, clearly-enunciated but still aggressive and threatening. I can imagine they are ripping up stages they are gracing at this year's SXSW festival and apparently Rolling Stone have named them as ones to watch.

This self-titled release is worth investigating purely for the song 'King Kong Brigade' alone, with the line 'I want to club yeah, like a baby seal' being a particular highlight, the track fading out with the sounds of apes going wild.