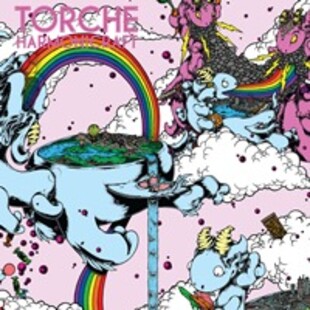 So one of the most unique bands in the whole riff-heavy/heavy riff genre are back.

With release after release compounding the fact that they still have ideas bursting out of their collective craniums and no let-up in creativity, it's interesting to hear what they have come up with for this.

Thankfully, they still crank the ampage, which is what is needed, but this time there's a more playful, psychadelic tone coming through. Reflecting the frankly insane but equally adorable artwork, there's flourishes of fantasy weaved into the usual warm tone that's actually quite welcome. On some tracks (Reverse Inverted for example) there's a strident solo or two from the geets, which lifts this from previous releases with an enthusiastic lick.

That vocal sound is still in evidence, four years on from Meanderthal (really!?!?!?) and Steve Brooks is still multi-tracking his weird caterwaul, which is most welcome, it's their trademark, as well as the sudden descent into a groove so hefty, you wonder how they don't get locked in like a never-ending merry-go-round. There's no skull-shaking 'bomb chords' this time, first seen on their debut, but they hint at it constantly, kudos to them for not just recording an album of that anyway.

This is a band that is approaching the same status as the best kind of band, one that is different, but always the same, not straying from what they know, but honing that niche until they are simply blowing people's minds.

They've got pretty close here, can't wait to see them live again, these songs should be a blast.