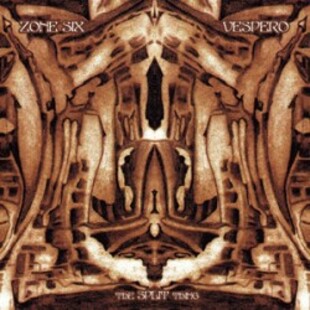 This is a Russian/German split LP with a serious dose of synth overload.

With the first three tracks being given over to the lucious Vespero, they use their time to not only synth things up for you, but also to perhaps out-Zombi the wonderful Zombi. Think keys that combine with laconic drumming and little zaps and spangles that spiral out into nothingness.

If this were a soundtrack to a film, the protagonist would be in trouble, not through danger occuring to him, rather he would be so confused even walking in and out of frame would prove a challenge, serious daydream territory.

Sadly this starts to drag somewhat and we're left with an almost Liquid Tension Experiment-like sense of self-indulgence (yeah that was the band that members of the exorable Dream Theater set up without the singer because Dream Theater wasn't spacey enough for them). Only investigate this if you don't mind stagnation within your riffs.

The other side doesn't bode well, at one track standing at an impressive 24 minutes, Zone Six take a more fuzzed up and elemental approach that allays any noodle fears right away. Preferring to let the music jam itself, they come across as a beautiful realisation of Acid Mothers Temple if they channeled stuff like Neu! a bit more, the motorik vibe shining through and a more dense layer of feedback-rich synth overarching the entire song, which dies a death among what sounds like broken speech, wordless burbles and other such frivolities. The Germans win this round, better luck next time Russia.