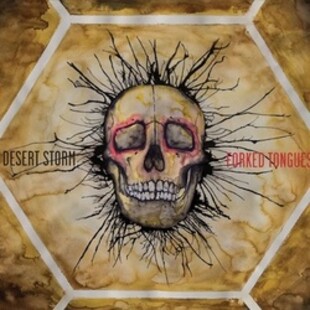 These guys have it going on, hairy skull on the cover, named after a US military operation and have enough bluster and stoner RAWK swagger about them to pull it all off stylishly.

Like a cross between Black Sabbath and Clutch during their early years, Forked Tongues is a pleasure from start to finish.

The vocalist sounds like all stoner rock vocalists should, pumped full of sandwiches and whiskey, his voice sounding like someone trying to lift a car after just eating a big tuna baguette. When they employ a female vocalist on two tracks, a strange thing happens. They don't transform into anything supernatural or anything, but they do take on a Black Grape/Happy Mondays vibe, which really works (and is a good thing chaps!).

I can imagine this band opening up for various stoner rock legends at the Underworld in London, or being a permanent fixture around London's various rock pubs, where since the smoking ban, mostly smell of piss. This is also a positive, the music suits such surroundings, dank, moody and just does the job well.

Investigate if you like your stoner rock loud, heavy and with a little Manchester psychedelia popping its head up now and again. The band are from Oxford, so check their live dates and catch them live soon.