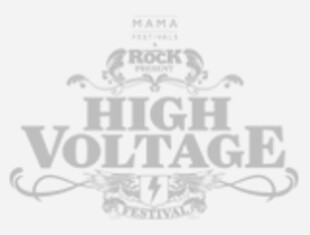 Since about 2003 onwards, the amount of music festivals in Britain seems to have mushroomed. What is more, quite a few of them have rather tasty line ups. Whereas once the best chance of seeing the music I liked at a festival was limited to scattered acts at Reading, now Download, Sonisphere, Bloodstock and a whole host of smaller events provide a lot of choice and good bands when it comes to live music outdoors.

High Voltage Festival is a newcomer to the scene. It's tied in with Classic Rock Magazine and is held in the pleasant oasis of Victoria Park in East London. This weekend however the park venue is parched by hot weather and is more a dustbath than anything. It doesn't detract from the fact that the line-up for the event - spread across a Main Stage, a Second Stage and a Prog Stage - is generally good. For the first time I can remember, I'm attending a festival which has no nu-metal acts on the bill and doesn't feature Trivium in any capacity. Fantastic!

My friend and I stroll in through the gates on Saturday at about 3pm, in no hurry. The first thing we encounter is the second stage where Orange Goblin are charging through the last few songs of their set. OG are always reliably fun to watch and this is no exception, Ben Ward as usual giving it his all. It's almost bizarre witnessing them playing in the daylight though. They draw a decent crowd response and I think a band with this live prowess deserves a higher placing.

We stay by the second stage for a good while as there is a string of good bands appearing on it. After witnessing Hammerfall's set from a distance, we get some ice lollies [it's by now pretty scorching] and stand by the sound desk for Cathedral's set.

This is about the eigth or ninth time I've seen Cathedral, and again it's odd seeing a band one associates with dark nightclubs playing in the full sunshine. Despite the slight annoyance of the sound level beng limited for an outdoor festival as it's in a built up area, Cathedral are excellent as ever. They open with 'Vampire Sun' and follow that up with a storming 'Utopian Blaster'. The set is only 45 minutes long but fits in a clutch of great songs. 'Funeral of Dreams' from the last album, despite its length and multi-sectioned approach, comes across very well live. The highlight beyond doubt is 'Cosmic Funeral' - one of their finest ever songs and rarely played live. The crowd is slightly smaller than Hammerfall's which is annoying as surely a band with a back catalogue like Cathedral's should be headlining theatres and be on the main stages of most festivals. People do wake up for the obligatory set closer 'Hopkins [The Witchfinder General]', though. Overall a great set and further confirmation that Gaz Jennings is the heir to Iommi's crown as Lord Of The Riffs.

Next onstage are Saxon who seem to play at every festival going these days. It's encouraging to see that they get a decent crowd and a good reaction to a professional and committed set filled with classic anthems like '747 (Strangers in the Night)', 'Heavy Metal Thunder' and, pleasingly, 'Crusader'. A couple of lesser known songs ('Dogs of War') come across well too. Mention must be made of Saxon's guitarists - both are excellent, especially Doug Scaratt, who plays screaming, adrenalin filled solos in every song. He should be in Megadeth. It's always a personal pleasure to watch him play. Biff Byrford is also great to watch - a professional, impassioned frontman that has a charisma not many bands can match.

We leave before Saxon have finished, however, because on the main stage the band that we have come to see above nearly all others is about to start. Heaven and Hell. Or as is engraved forever in my soul, BLACK. FUCKING. SABBATH!

This particular show was supposed to be the latest date in a summer tour supporting H&H's recent album 'The Devil You Know'. But the recent passing away of Ronnie James Dio, an iconic and irreplacable frontman, and a musical legend, brought events to a tragic halt. However, the remaining members - Iommi, Butler and Appice - decided to play their slot at High Voltage, with Masterplan vocalist Jorn Lande and another vocal legend - Glenn Hughes - sharing singing duties.

This is not a continuation. This is very much a full stop, but more than that, it is a valedictory. It is billed as 'A Tribute To Ronnie James Dio'. And while it is a great show, there is a mix of emotions running through the band and the crowd. A celebration of a great icon and a legend, and a friend and simultaneously a mourning at his passing. My friend notes this mixture and compares the atmosphere to a wake. In agreeing to this opinion, I in no way intend to say that this was an unenjoyable show.

Because it is a historic and fitting send off and a passionate run through of some of the greatest songs in metal history.

The setlist is slightly brief - this should really have been a full headline slot - but well chosen. The songs run down as thus: 'The Mob Rules', 'I', 'Country Girl', 'Children Of The Sea', 'Turn Up The Night', 'Voodoo', 'Bible Black', 'Falling Off The Edge Of The World', 'Die Young', 'Heaven And Hell', 'Neon Knights'.

The two vocalists take it in turns, doing two songs each time. This works well - it's clear that they've chosen Lande to handle the more aggressive, harder-edged songs such as 'I' from the underrated Dehumanizer album, while Hughes does the higher-pitched, slightly more anthemic and soaring ones. Lande is something of a revelation - Iommi should consider working with him in future on any solo projects. Hughes occasionally mixes up the lyrics and is clearly deeply affected by the whole situation but handles things well and is generally great, especially on the high pitches.

On a storming rendition of 'Heaven and Hell', both the vocalists trade lines of the song, and on set closer 'Neon Knights' they do the same thing, but are briefly joined by an impromptu appearance from Phil Anselmo, who runs through a few lines then scampers offstage again. This is brilliant to see - we can sometimes forget that musicians at the bottom of it all started out as fans like the rest of us, and are still fans at heart. What fan wouldn't take the opportunity to sing onstage with their favourite band at probably their last ever show!

There is a finality to this performance. The lines to 'Children of the Sea' say it all, as Iommi and Butler crank through the riffage: "Though they say that it's over...."

Appice seems to be hitting his drums with more determination than ever before. Butler is unobtrusive throughout the set, but his basslines are always there, underpinning the whole thing. Iommi partners him with riffs that are simply some of the greatest ever written. His solos are superb too. A short interlude before 'Die Young' gives him the opportunity for a short guitar piece that's very Pink Floyd-esque.

The highlight for me though is 'Country Girl' which I did NOT expect to hear and sends me completely over the edge. It is marvellous.... oh GOD that RIFF... and Hughes is great on it.... I go nuts and my enthusiasm is at a high throughout.

This performance was a great one musically, but the extra edge that the situation lends it gives it the extra edge to be one of the best gigs this year. It's historic and sad - I bought Heaven and Hell nine years ago and loved it. To my mind the Dio and Ozzy Sabbath line ups are equally brilliant. These songs mean a lot to me and to many, many others and it's har to believe that this is the final time Black Sabbath [for it IS Sabbath up there] will play them. Given that the Ozzy line up is dormant, this could well have been the final Black Sabbath performance ever. The crowd chant Dio's name and then roar along to the main riff from Heaven and Hell....

It's ultimately a triumph, but with a great sadness. Because Dio should have been up there, urging the fans along, leading the band through a great set. Instead it's a poignant but fine ending to a brilliant band and a tribute to a life well lived. Wendy Dio, Ronnie's widow, comes onstage and thanks the crowd, before announcing about the cancer fund set up in his name - surely a very worthy cause to contribute to. The proceeds from this concert are being given to this fund.

A historic occasion, no less.