The Melvins The Bride Screamed Murder 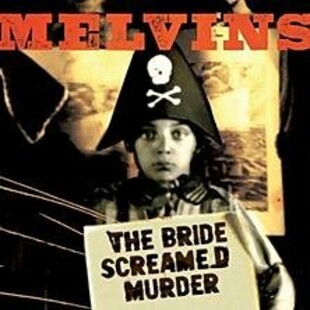 I started writing a typical review of this album, but it sounded like such an untypical album, I thought I'd approach it from a different stance, here is what each track on The Melvins new album 'The Bride Screamed Murder' reminds me of:

1. The Water Glass - This sounds like a train setting off, dragging Dale and Coady's drumkits behind it with no care for how much they cost while Buzzo and the rest of the band perform a camp acapella vocalisation that wouldn't be out of place on a West End stage.

2. Evil New War God - Buzzo proclaims himself a God while the others nod in agreement, a very traditional Melvins jam that has far too much cowbell (yes it is possible). Turns all science fiction b-movie towards the end with some organ and some freeform jazz explosions via percussion wanderings.

3. Pig House - Navajo Indians send smoke signals out while The Melvins play through Red Dead Redemption on their tourbus.

4. I'll Finish You Off - The spirits of the still-dead members of the Beach Boys enter the minds of The Melvins for a track laced with high-pitched vocals and hammond organ, a truly epic track that can only get better with repeated plays, really nice.

5. Electric Flower - A generic track in the truest sense of the word, immediately recognisable as Melvins, but all the more boring for it, no surprises on an album full of them, weird.

6. Hospital Up - A laid-back country-esque romp that brings to mind a more punk-inclined Earth. Features Dalek-like vocal effects, which can never be a negative, surely. This particular track would come up trumps on a long drive. To where is your choice, but you'll have a good time on the way.

7. Inhumanity and Death - Snotty and unpleasant, this sounds way more punk than any other track here to begin with, then becomes a drum workout, then becomes a stoner rock monster, and ends with the sound of a dragon breathing.

8. My Generation - A Melvinsified take on the old Who classic, imagine Daltrey and co on downers on Sesame Street, whacky but not in a 'look at us eh?' way. The riff snakes up and down the fretboard in a tired way but this sounds cool. I imagine it'd sound good through PA speakers at a sludge gig. Fades to an elongated and unessecary end, lovely.

9. pgx3 - This is an old Candian folk song and has been performed by a million different people under its real name 'Peggy Gordon'. This take on it is drenched in acapella'd reverb and has an incredibly haunting quality. Would do well with a promo video of docks and still shots of the moon.

Forums - Reviews and Articles - The Melvins - The Bride Screamed Murder