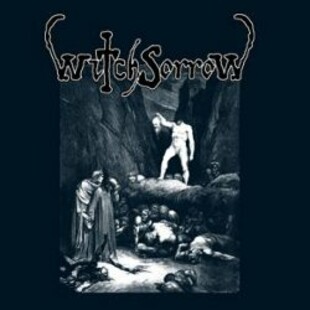 After five long years of plying their grim trade up and down this rainy isle, with nothing more than a warmly-received rehearsal tape to their name prior to signing with Rise Above, Hampshire's Witchsorrow have made an album and it's well worth the wait.

Clocking in at a frankly ridiculous 45 minutes for just five tracks, their self-titled debut offering is a masterclass in true doom melancholy, eschewing the softer end of the spectrum in favour of sheer balls-out metal. As far as this power trio are concerned, flouncy open necked shirts are out and denim and leather are in.

Anyone preferring a silky melodic croon with their down-tuned guitar action will find themselves shit out of luck, with vocalist/guitarist Necroskull delivering a morose, hell-gazing bellow more reminiscent of Jus Oborn than Albert Witchfinder. The lyrics set the tone perfectly, conjuring all sorts of gloomy (admittedly, largely witch-based) imagery from the depths of history, delivered with horns-in-the-air conviction.

They may not be treading any new path, but that's part of their appeal - straight-forward, heads-down, snail-paced riffage coupled with drumming that could nail an elephant into a coffin, with no concern for Thy Hearing. Hail!