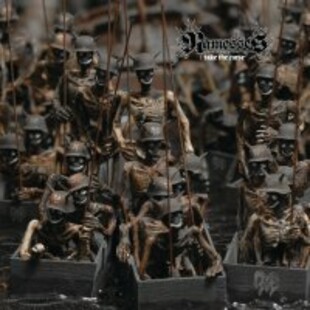 Quake with mortal dread, you puny mortal fuck. Ramesses crush the jugular with this, their second full-length studio album: a potent fifty-four minute ten-track pleasure cruise through some of the most seductive ‘scimitar and fangs’ doom-filth that you will hear all year. Top marks to this combustive home-grown power trio for sealing their sound with an originality found nowhere else. Ever since that first superb ep (‘We Will Lead You To Glorious Times’) rolled out in 2003, Ramesses have belched out a consistently astounding mutant hybrid of dark horror-metal that oozes both subtle catchiness and ugly psychedelic brutality.

Opener ‘Iron Crow’ is one of the strongest and most immediately memorable tracks on the album – a bruising metal-clad fist that’ll actually have you humming the chorus. Starting with tripped-out noise and Mark Greening’s titanic drumming (possessed by the arms and feet of dead drum god Bonham), we are soon into the familiar Ramesses territory of uber-heavy power chord shifts, pile-driving percussion, chiming sub-gothic minor chords and Adam Richardson’s hoarse and chasm-deep vocals.

In fact, Adam’s vocal style is the key to success here. His range is fuckin’ well impressive; from stoned guttural hell-rasp up to soaring metal bellow with more than a hint of melody. It works extraordinarily well over Tim Bagshaw’s inventive, dexterous and multi-faceted guitar work; particularly when you have someone of the calibre of Greening punishing the skins too. The doomy and languid ‘Terrasaw’ has wonderful overtones of incense-fused prog with the subtle keyboard passages laced in towards the closing minutes.

Another feature that works so very well is the inclusion of cheesy dialogue samples from classic seventies horror such as ‘Dracula AD 1972’ and ‘Taste The Blood Of Dracula’. These film excerpts blend in a cool fandom element that sits perfectly with the brutal drive of the Ramesses sound. ‘Black Hash Mass’ builds around one of these samples, weaving in both jackhammer-fast black metal sections and slow funereal doom.

Title track ‘Take The Curse’ is a slow burning hymn to occult power, containing a great and rather simple-but-clever solo that uses a pentatonic scale to evoke visualisations of foul ancient crypts buried under scorched sands. No, don’t think of shit-flick ‘The Mummy’ with baby-oiled wrestleboy ‘The Rock’ in it. Think of H.P. Lovecraft and Clark Ashton Smith.

‘Vinho Dos Mortos’ is a short guitar track fused with horror samples - bereft of percussion but high on atmosphere. Three tracks on this album appeared on an ep released last year that I reviewed for Nine Hertz. No, I don’t feel disappointed by their inclusion – they are ace numbers and deserve not to be lost to the potential obscurity of an ep. ‘Baptism Of The Walking Dead’ is a triumph of horror theatrics and searing doom-injection fret-work (I’ve always wanted to include the term ‘fret-work’ in a review, but previously I was held back by issues of taste, but with the insert of the pre-fix ‘doom-injection’ I feel completely justified).

‘Another Skeleton’ follows, also off the ep. This is the possibly the loveliest piece of psychedelic horror-doom that I have ever heard. The double tracked vocals that characterise much of the Ramesses sound work beautifully here. ‘Hand Of Glory’ blasts out with a vibe very akin to early Bathory, before slowing down to eerie gothic sludge. ‘The Weakening’ is classic black clad doom metal – fucking hell, it even starts with church bells. Textbook!

‘Take The Curse’ finishes with ‘Khali Mist’ (also first heard on last year’s ep) – a brilliantly ominous and brooding paean to the multi-armed goddess of death and destruction – surely everyone’s fave Hindu deity. I love the line ‘red blood, blue flesh’. Would that be the blue flesh of the dead, or the blue flesh of Khali herself? Answers on the back of a postcard please.

This devastating long-player cunningly combines both vintage Ramesses (an evil down-tuned maelstrom of magnificently bludgeoning power) and an evolutionary lurch forward into musical accessibility. 'Take the Curse' is a triumph of both dynamics and harmonics and quite simply represents the black zenith of Ramesses's artistic legacy to date.