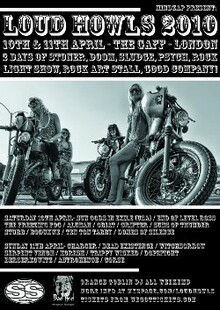 Where: The Gaff, Holloway Road, London.

What: Snack-A-Jack Dickinson assembles a snarling, beefy, sweaty, mish-mash-up of live stoner/prog/sludge/doom/psych/rock n’ roll for all of London Town to enjoy, along with fine ales, beautifully immature banter and glorious sunshine!

Bodokwe – Warm up the early-nerds very nicely with their instrumental Tool-esque sweep on jazz-funk and prog rock with added chunky grooves.

Suns of Thunder – The Brighton Boys are here to have fun, and extending the stage into the sweat-pit, that is what they do, whilst bringing their fast-paced Hammond-organ-drenched boogie-a-thons to North London with class.

Alunah – Despite a slightly disjointed set, these Brummies sure do have a great bunch of Sabbath-esque songs, with plenty of rumbling low-end and mesmeric high-end female sing-song.

Grifter – Grifter know how to party, which is good as that’s what everyone wants by 10pm; balls out riffage, relentless tub-thumping and barnstorming-bass – this is Motorhead having a curry with AC/DC!

Sun Gods In Exile – “I’m a fucking American and I want a beer!” – Grifter’s recent tour buddies are determined to enjoy their final UK date and their sweat-drenched Southern Yankie blues bring guffawing and grinning to all in the room.

Outskirts To Infinity – The prog-rock widdlings of these gnarly old boys divides opinion in the room like Marmite; like Yngwie Malmsteen, but with way more pensioners.

EyeHateGod – Obviously not good enough for Loud Howls, they were a no-show and are probably still selling their own gear for weed somewhere in Dagenham.

Berserkowitz – Pummel both the fresh-faced and hungover few alike with their gargantuan High On Fire-ian drone, topped with scorching Iron Monkey-like bellowing.

Dead Existence – A scorching tech-metal approach to sludge with a superb frontman and razor-sharp fret-work.

Witchsorrow – Snail-paced yet heavier than Tony Iommi’s pet whale, there is no description to offer here other than DOOM.

Dopefight – Tune down and turn up the volume before riffing the crowd senseless for 30minutes – like Saviours drag-racing The Sword.

Koresh – A life-changing experience for pretty much all involved, more out-right male rape than music; scary but happy.

Trippy Wicked and the Cosmic Children of the Knight – Take the audience into the palms of their hands and blast them down a blues-soaked kaleidoscope of epic rock landscapes.

IN SUMMARY – Tired, pissed, riffed and bruised in a pub painted black – what a way to spend a weekend!