Eagle Twin The Unkindness of Crows 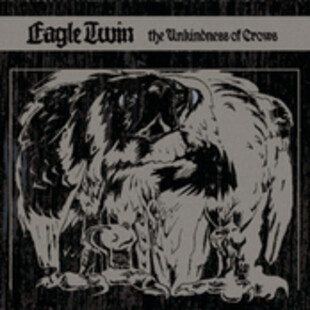 Interesting album this, a duo who play a rumbling sort of bluesy doom and feature the singer and leader of visionary prog-esque weirdy-beardys Iceburn.

If you asked the lords of drone themselves O'Malley and Anderson to cheer up a bit, but not too much, this is probably what would happen, enough going on blues wise to interest the average doom fan and enough plate-moving drone power here to please even the most hardened audiophile.

Coming across like a more obvious version of Atilla's work with Sunn0))), singer Gentry Densley croaks and yawns his way through almighty sections of drone and is clouded with enough fuzz to stuff a very metal teddy bear. Where this may fall flat is the overwhelming lack of speed present, riffs seem to move in such a fashion that you wonder if they are moving at all, but when they do get going, it's all over too quickly, relying heavily on sustained chords and whistling feedback looping infinitely. The production is first class, Randall Dunn (he of Asva, Earth and WITTR fame) pulling hard at every chord struck.

A Sleep influence however lies at the heart of all this, the guitar tone and the tantric, trance-like guitar wizardry on display recall the slow-burning majesty of classics like 'Dragonaut' with ease, then at times invoking the spirit of Matt Pike, all solos and what you imagine to be some epic guitar poses in the studio process.

Densley shines on 'Storytelling of Ravens' with some dirty, hobo-esque poetry bubbling over the top of some arid desert guitar and distant squeals of ramshackle amplification.

So an album of myriad influence, a bit of Earth here, a bit of Melvins there, but can you pin down an overall theme? I certainly can't.

Forums - Reviews and Articles - Eagle Twin - The Unkindness of Crows