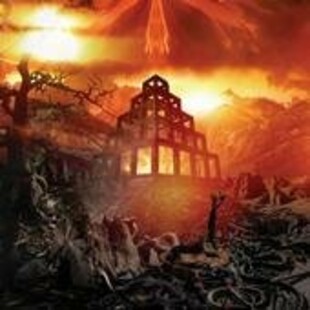 If the blurb accompanying the review copy of this much anticipated offering is to be believed, you are very lucky to be reading this review at all. I clearly should have masturbated myself into an early grave by now, my energies spent in a fit of fan-boy priapism brought on by the mere thought of what this "meeting of musical monoliths" could offer.

For those that haven't been keeping up, the chaps in question are Scott Kelly (Neurosis), Dale Crover (Melvins), Al Cisneros (Sleep / Om) and Wino (of everything, ever). I'm not going to begin to question the credentials of this lot as their track records speak for themselves (well, except the one who hasn't had an original thought in at least 15 years, but we'll come back to that). However, I do reserve the right to expect their collective output to be nothing short of excellent.

Which is why I'm disappointed. Very disappointed. My initial fears that this would tun out just to sound like everything else Wino has done (I told you I'd get back to that) turn out to be thankfully unfounded, but unfortunately the plus points end there. There are some nice chilled out moments, and a couple of interesting bits very reminiscent of the Melvins, but not once is the listener assaulted by what could even be described as a moderately big riff.

The four tracks allowed for review purposes meander by without leaving any lasting impression whatsoever (apparently letting the press have the full album would have caused the breakdown of western civilization). It leaves me wondering if they shot themselves in the foot by leaving a killer last track off the promo, or if they had a moment of clarity and realised most reviewers would probably get bored and wander off by the time it got that far in.

Further study of the press release reveals that this was written and recorded in three days. That explains a lot. The blurb also suggests that this is planned to be the first of many Shrinebuilder releases. I sincerely hope that they buck their bloody ideas up before the next one - this isn't awful, but given the protagonists it should have been so much more. C for achievement, F for effort.