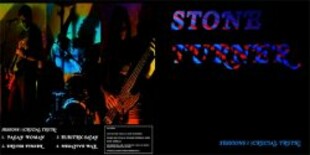 Stone Turner, asides from sounding like the name of an action hero, are a three-piece specialising in straight out blues-driven, heavy rock. Amongst their ranks are Jack Dickinson on guitar and vocals, Isabella on bass (both of psych-rockers Stubb) and Richard Goodwin Jones completing the trio on drums. Their latest offering 'Crucial Truth' is a self-released EP recorded live in their rehearsal room with suitably lo-fi production.

Don't let the rough sound put you off, as more than anything, it showcases Stone Turner's ability as a live act. It's the sheer volume that comes across most of all as drums are battered with endless gusto alongside a monstrous bass tone whilst echodistoreverberated vocals break the surface with a distant splutter. Surely anything not nailed down would be shaken to oblivion by the time the wah-strewn guitar solo kicks in on the opening track Pagan Woman. Then just as the dust settles, Druid's Finger explodes with a riff that could easily challenge tidal power as the best in new sustainable energy sources, never mind ruin the plaster-work of your average basement bar.

Overall, the four songs on Crucial Truth are full of overdriven psych blues, which, apart from expansive guitar solos, rarely diverges from the main ideas. This formula works well here though, a few more riffs and some quirky ideas should see this band go far.

Being an eighties kid, I can only read scattered tales of the psychedelic boom that hit London in the late sixties which saw spectacular musicianship colliding head on with mind-altering substances, whilst flamboyant characters gathered in places like the Speakeasy, where, if Stone Turner were had been around, they'd be the in-house band.