The Soulbreaker Company The Pink Alchemist 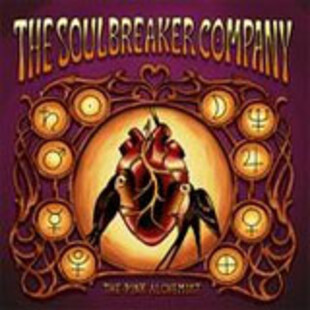 Holy shit Señors, I think I have fallen in love!!!! There has always been something sexy about Latino culture and certainly Latino women are no slouches... Salma Hayek, Penelope Cruz, Eve Mendes to name but a few who might get the blood pulsating!!!! Spanish rock, however, may be a bit thin on the ground but here is a band who could seriously change all that.

The Soulbreaker Company, a 6 piece band from the Basque Country, have turned back time on this, their second album to create a piece of work that distils all that was great about those 70s rock bands we know and love like Cactus, Led Zeppelin, Black Sabbath and Grand Funk and pepper it with some fiery Latin goodness. TSBC (as they shall henceforth be known) follow a similar retrogressive path as bands such as The Black Crowes and Raging Slab and have laid down 11 tracks of such tasty flare wearing rock that it’s hard to find the superlatives to do them justice.

Opening track 'Elliptic Turns' immediately blasts forth with some stirring jazzed up horns that let you know you’re not in for just another stoner ride through fuzzville!!! Elsewhere 'Old Man’s Boogie' kicks in with some sunburnt blues in the vein of prime Free or Cactus. 'Blood That You Wish' can rival Sabbath for heaviness with a riff not a million miles from Uriah Heep’s classic 'Gypsy' (one of the great unsung metal tunes of all time!!!). 'You Shouldn’t Cry' would have sat very comfortably alongside anything on Captain Beyond’s debut album with its funky syncopated fuzzed out riff, while 'Kiss in Your face' tips it’s hat in the direction of a certain Mr Hendrix. At the other end of the spectrum 'No More Tears About It' is a beautiful soulful ballad that Otis Redding would have been proud to nail with its shimmering organ line and horns.

I can’t pick out a stand out track as everything here is of the highest quality. Musically these guys are right on the money and can twist and turn within their 70s roots to create a rocked up, souled out jazzy slice of groove that’s as big on subtlety as it is on muscle. From Sabbath to Santana this is a righteous ride from a golden era. The whole thing is presided over by vocalist Jony Moreno who boasts an impressive set of vocal chords that evoke Chris Robinson’s nasal twang... hey, it got him a million in the bank and into Kate Hudson’s bed so it’s got to work right?

Alone Records have certainly hit gold here, now, if only we could entice them away from the Spanish sun and siestas to play over here in our dreary little country.. maybe they’d spread a little golden magic for us.

Forums - Reviews and Articles - The Soulbreaker Company - The Pink Alchemist