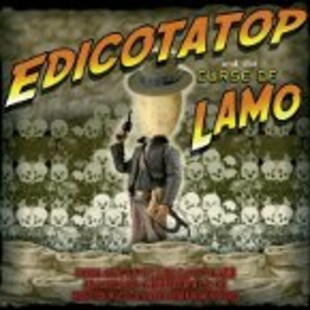 Jeeeeesus. For two folks, this is really heavy sounding. I have no idea what gear the guitarist in this band uses but it’s the same kind of effect you got with arty keyz and drumz duo, Quasi, where the organ was so fuzzed up, that it sounded like all Big Country gone mental. And they had a BIG sound. Obviously, this means that some of the definition of the riffs is lost, but who gives a tinker’s tit about that. It sounds lovely and FILTHY. Not to mention horribly crushing. And anyway, singer lady Ais, has such a strong, clear voice (that in my ears sounds like Steve Miller meets Lily Allen meets Layne Staley, but I am very, very ill) that the contrast is striking and simultaneously unsettling in a “how can someone who sounds that fine make something as grimey as this?”

First track is the title track, 'Edicotatop', which is less of a wall of noise than a trench of treacle. Imagine drowning in Lyon’s golden syrup only heavy as a dinosaur’s ballbag and dirty as a bucket of turds. Drums pound manfully throughout this release, lurching this creature all over the shop and keeping the chaos pinned back just the right amount before unleashing all kinds of mental at the of final track, 'Gerrajob'.

Falling firmly in the “whatever” section of 9Hz, this is as arty as girls in thick glasses with vintage photographic equipment, hanging around outside St Martins and trying to get with fellas that look like they fiddle kids. Which is fairly arty, although this is not up it’s arse really and can appeal to those who have more base pleasures than sitting around discussing how since Gunther Moeller moved to Japan, his sonic sculptures have gained new levels of meaning and significance…hmmmm…boooooooollllllllocks.