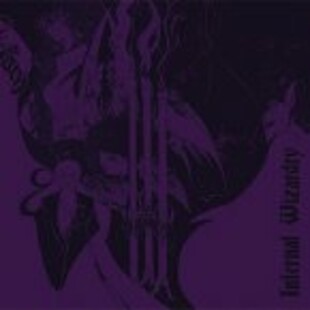 DOOM DOOM DOOM, I actually like a good slice of it, I like the way it make 'yer teeth rattle, but I guess the doom I like is more of the Electric Wizard variety and less of the so called TRUE DOOM variety. Having said that I have a place in my listening spectrum for the likes of St.Vitus as they put out some mighty fine records.

The Wizard want to be St.Vitus quite a lot I would say, they've tried to record this record that way, it has all of the core elements there, references to satan etc, it's slow, everything is reverb laden, but what it really lacks is anything that makes it stick out. It's like they've followed the true doom pattern so rigidly that they don't have anything new to offer, as it says on the back of the CD "The Wizard play True Doom Metal Exclusively".

If I wanted a better version of this album that actually had some kind of charm about it I would simply head for the aforementioned St.Vitus.

The music, for what it is, isn't actually that bad but the vocals are maybe an acquired taste, 'Ol Rusty Vintage Wizard Master' as he's known in the sleeve notes kind of half mutters half wails and just doesn't really sound all that convincing, I doubt he'll actually manage to coax any demons out of hiding.

Oh and they really don't like goths as explained in the track 'Crushing Gothic Slime' with its compelling lyrics such as 'Malnourished, their arms are sticks, so ugly, they make me sick'. I'm sure they'll be running for the hills with trench-coats flailing after hearing that.

Then the sound samples on this CD, that one would guess are supposed the be the voices of demons etc really don't help. It all sounds too cliche, the same of which could be said for the CD art with its very original black background with purple writing, hmm where have I seen that before? I feel if they had tried to do their own thing a little with this album rather than re-treading old ground they might have been able to do something of some interest. Maybe if they had a better vocalist, some slightly new ideas (still possible even when making something sound authentic) to set them apart from the pack a bit The Wizard might be worth a shot.

For the time being I'll stick to St.Vitus or maybe this whole thing is just some kind of tongue in cheek exercise, they do have a guitar player called 'Sir Nunn Piss' after all.