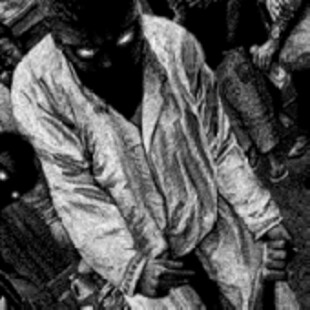 Overmars are a French band who play a metallic take on Neurosis and the whole post-metal genre, their previous album 'Affliction, Endocrine... Vertigo' was a heavy beast and this new one-song, 40 minute cut is similar in scope. Most notably changed this time though is the vocals, not only do we have a growled and common delivery, but also a piercing screaming voice that sounds desperate and trapped throughout the whole release.

A persistent wave of guitar after guitar really does not let up and its gnarled riffs never raise beyond snail's pace in that Khanate-like way that just eats into you, chugs, doom slowdowns and a general uneasiness is what Overmars have attained here and its a hard listen, almost to the point of impracticable heaviness.

Because of the speed and rigidity of the song, you would do well to last through the entire release in one sitting.

The reality is that for all its bluster and the undeniable effort it would take to write such a long song and commit it to tape, it really is quite boring, there are better bands out there doing the same thing, sad really.