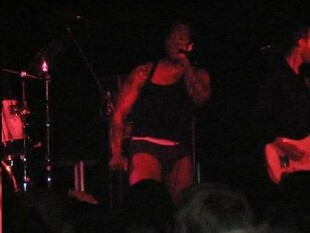 Last time I saw Manatees they were painfully loud, even through my poncey special musicians earplugs. They seemed a little more reigned in tonight during their 1 song 30-odd minute set but were still impressively epic and brutal. I have to confess to owning only 1 of their records and not being too familiar with their catalogue, a fact that makes me feel more guilty every time I see them live and they never fail to amaze me. Tonight they walk out, plug in and pretty much pound the audience into submission. There's not much let up, but there doesn't need to be with such well crafted progressive metal and it's enthralling from start to finish. For every 10 wannabe Isis post-metal bands, there is a band like Manatees who walk over everyone else carving out a new sound in an overcrowded marketplace and make it look easy.

Alas, Harvey Milk don't fare so well. I'm partial to the odd sludge riff. I even play them every so often in songs and stuff. But when virtually a bands entire set is just constant sludge, it gets a little overwhelming. I guess this is the point to some extent, but I find it a little dull. With little dynamics on display, songs melted into one another and I soon lost interest, sitting out the rest of the set on a very nice leather seat, keeping an ear open to try and see what the appeal is. Their influences on MySpace include "Tigger" and as a band, they have a well respected pedigree. For those reasons alone I wanted to like them, I really did and I thoroughly enjoyed 'Merlin is Magic' when I researched them before seeing them. Sadly, they failed to reach me on any level throughout their set. Wrong reviewer, wrong band I guess. Still, Mike thought they were ace.

I have a slight issue with Oxbow. There's a myth surrounding Eugene Robinson which seems to precede the band, and I always wonder how many people go and see them just to see if he gets naked, puts his hand down his trousers or KO's an audience member as opposed to actually wanting to, you know, watch a band play music or something. He's the undeniable focal point of the band, seemingly to their detriment sometimes and it's grating to see another article shifting focus away from the bands music and asking Robinson about his muscles, fighting or his sex life.

Their music itself is hard to describe. Last album 'Narcotic Story' was a strange beast, reminiscent of The Afghan Whigs '1965' filtered through Neurosis, all southern heat, cigarette smoke and underlying threats of violence. That said, it's probably their most accessible record and it's the material from this that works best live, even without the albums excellent strings. The earlier material seems very unstructured compared to recent songs, and it seems like they rarely hit any kind of groove, almost like they hit upon something amazing and then decided to make the listener work for it. They're immense when they write heavy parts, but a lot of the time it's very difficult listening. The set reflects this, opener 'The Geometry of Business' kicking things off in fine fashion and the more meandering songs forgiven by proximity with the amount of genius on display and force when the band hit their stride.

The band are something special in a live setting, commanding attention and focus from the audience. The albums might be uncomfortable listening for some, but anyone merely liking Oxbow on record should try them in a live setting. It might just be where all the hard work pays off, the band makes sense and suddenly you find yourself watching a gig you'll remember long after you've left the venue.