Jesus Of Spazzareth Kill Him, Kill The Blasphemer 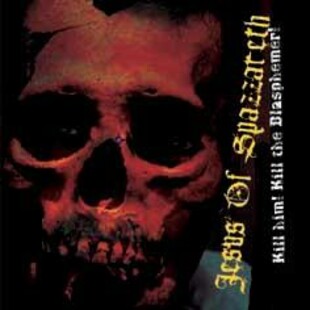 Resurrected for the third time, Jesus Of Spazzareth finally present us with their first release 'Kill Him, Kill The Blasphemer' after 4 years of trying, courtesy of Calculon Records. For those not familiar with the band, a couple of members of Bumsnogger started a fun hardcore mob, but were plagued by the joviality and sometimes sloppiness that inhabitated early gigs. Coupled with a revolving cast of drummers and bassists, left them cast in a not so favourable light at times, despite their best efforts and raucous gigs.

However, things are looking up, with a settled line-up, new songs and more serious approach. Mainly dealing with the d-beat, old school hardcore with a filthy sound, a polite nod to thrash (check out the guitar solo that opens 'Stab Twist Kill'), and topped with a rock 'n' roll swagger, Jesus Of Spazzareth dish out 12 tracks that have been trimmed of fat and excess, and get to the point. The 2 vocalists approach works well with both having distinctive voices, and it's great to hear the English accent come through, when many favour to ape that of our friends across the pond. Lyrically, a wide range of subjects are covered including social issues like drinking, friendships and the d.i.y music scene, and also broader issues like military history. Intelligent stuff, indeed. The use of well-chosen samples at the start of each song lighten the mood inbetween the slabs of raging hardcore too.

A sterling debut effort that buries the ghosts of Spazzareth's past, and deserving of a spin on your CD players.

Forums - - Jesus Of Spazzareth - Kill Him, Kill The Blasphemer