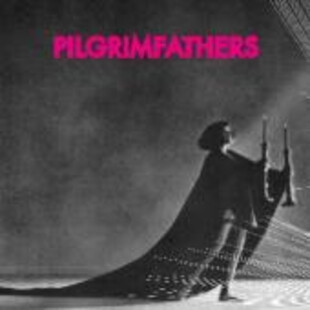 Following an increasing trend here on ninehertz, I shall undertake my first review in oooh, donkeys, by attempting to write it while becoming more and more drunk on wine.

I admit to being familiar with Pilgrim Fathers before buying, yes buying, this CD, having seen them play a couple of times in Sheffield. Their live show was, and probably still is fairly awe-inspiring. I can't think of an easy way of describing them to the uninitiated. They're heavy, but there's more there. The usual contemporary metal comparisons apply to sections of this album but few are repeated through the disc and aren't worth mentioning for the bereft time they might seem relevant. First track, 'Ballad of the Trojan Elephant' is an excellent example, moving from section, never repeating and drifting effortlessly between crushing heavy and chilled out bliss. It's one of the reasons there's an unusually small amount of music nerd music description in this review; I'd be here all day. It would be easy to sum up the overall sound but there's too much going on for me to do so as it wouldn't be doing the band justice.

Despite the judicious use of keyboards/samplers and vocal effects, I'm loathe to use the obvious term of 'Space rock' to describe what's going on here. There might be a definite psychedelic influence running throughout, but if other bands that tried this used synth swells and samples instead of the overused Hammond organ then they might be able to sound a fraction as innovative as what's going on here.

While we're on the subject, I'd like to heap praise on Dan Gardner, sample/keys man, last seen sat on the floor of every venue I've seen them play, Schroeder style, hunched over his keyboard, adding whole other dimensions to Pilgrim Fathers songs with Neurosis-esque ambiance and effect. I'd also like to take the opportunity to offer him a permanent spot in Flatlands, should Pilgrim Fathers not work out for any reason. I don't have to check with the rest of the band because I'm fit.

Any initial worries about whether the band's live energy would transfer onto disc has been truly erased. I bought this album on a bit of a 'support the local music scene' whim and was expecting to like but not love it. However, this is a great album, and from someone who seldom listens to metal at home that's as high a praise as I can give it. 'Short Circular Walks....' has also been given precious space on my meagre 1Gb MP3 player, causing the erasing of Envy's 'Insomniac Doze' album. There's something for everyone here, balls-out heavy, beautiful post rock, cutting edge metal, old school Kyuss inspired stoner and rock and roll boogie. There's something for every metal fan on here and it's albums like this that make me very, very angry bands like Trivium are still going.