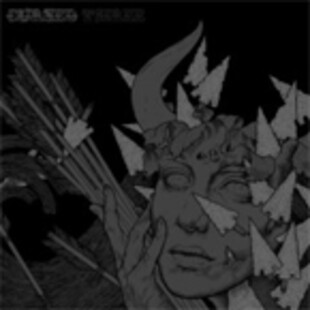 A quick story if I may beg your indulgence. For years, my buddeh Shelley worked in a little independent record shop in Swansea. Almost ever since she got the job there was a CD in there with the sticker "The LOUDEST band in Canada!" slapped across the middle of its black on black goat-faced devil cover which never stopped amusing us in the several years it was in stock. Finally, having heard lots of people who's opinions aboot music I had a lot of respect for raving aboot Cursed for ages, I looked at the cover at just the right angle to notice for the first time ever that it said "Cursed - II" on it. Suffice to say I bought the CD immediately (much to Shelley's utter bafflement), took it straight home and was thusly introduced to what many would argue is one of the very finest Hardcore bands to have ever graced the planet, regardless of where they come from, amusingly worded advertising stickers or however many Terrence and Philip gags you can throw aboot in one album review.

As a result of all this, I didn't have to be asked twice when given the chance of reviewing 'III: Architects Of Troubled Sleep' and sat there patiently for what I just knew was, barring absolute disaster, going to be one of the best CDs of 2008 to arrive.

The album started and the atmospheric title track intro built up oot of menacing synths, terrorism-leads-to-a-rule-of-fear samples and low in the mix tortured feedback (bringing Front Line Assembly at their mid 90s peak strongly to mind even after all these long years) building the tension brilliantly for the imminent massive burst of furious, sludgey, down right vicious nasty hardcore that was aboot to redefine the words "BEST. HARDCORE. CD. EVER!" for me and then it happened. Something I could have never foreseen that took me so completely by surprise that I almost completely shut down, shying away from the CD player and concentrating on other things to try to somehow lessen the disappointment...

Heart broken, I let the CD play oot barely even giving it half an ear and then couldn't bring myself to go back to it for nearly a week. On second listen it didn't fare an awful lot better. Whilst I could now hear that it was definitely still Cursed, everything was too fast, too throw away... Like I said, it was just all too Converge.

Then just now, having finally got around to the other reviews I've been threatening to do for ages, I decided to chance my hand again, see what happened, would it be (Cursed -) III strikes and you're oot...?

Some times it pays to be a stoic old bastard.

'III: Architects Of Troubled Sleep' is spectacular. From around about track 4 or 5 ('Antihero Resuscitator' and 'Friends In The Music Business' respectively, both stand out tracks in their own right) you suddenly realise that this isn't Converge at all, it's just Cursed squeezing that tiny little extra bit of fury oot of their sound that, listening to 'II', you'd never have thought possible. Track 5 especially, with it's turgid, bowels-of-hell feel and world-collapsing-round-your-ears ending doesn't take any prisoners, leaving no uncertainty as to whether or not this band are fucking aboot with weak copyist nonsense or rather continuing to gouge their own scars on the surface of the world for all to see as they always have done.

From there you sink back into the joyous un-tempered rage that has made Cursed the sort of band that makes grown (and usually bearded) men go all a bit misty eyed. 'III:...' carelessly but irresistibly drags you along by the front of your blood stained shirt, at once slow, languid and vile before suddenly exploding into full force, stinking drunk street brawl frenzies of bile and repressed anger, never missing a beat and still carrying its 'governmental-control-through-fear' message with it without ever cramming it down your throat as so many other Hardcore bands seem to think is acceptable.

The long and short of it is that 'III:...' is basically just 11 straight good solid kickings for you in a row, the only real let up being that sometimes they're punching you in the face a little slower with a slightly more morose expression on their face than they were a few minutes previously. Even the instrumental closing track (rather conveniently for this metaphor entitled 'Gutters') manages to perfectly convey the feeling of lying by the side of the road, bruised, bloodied and broken, trying to understand what the god damn hell just happened to you...

And so there we are, proof positive that sometimes things aren't what they at first seem. Sometimes they're a whole shit load nastier and more vicious. Sometimes they are a new Cursed album after all...