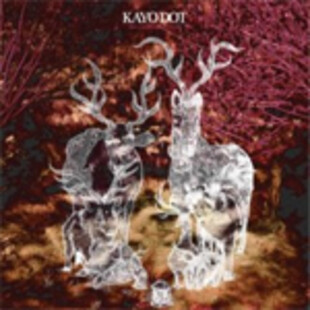 For me Kayo Dot's 'Dowsing Anemone With Copper Tongue' is one of the best albums of all time. It was such a huge leap of progression for the maudlin of the Well days, and the debut 'Choirs of the Eye' on John Zorn's Tzadik label.

'Dowsing Anemone...' features a complete meshing of classical instrumentation with rock and heavy alternative music leanings that could only be described as doom or noise when the came about. Songs like 'Gemini Becoming The Tripod' and '____on Limpid Form' were stunning and still blow 99.9999% of bands out of the water.

Kayo Dot inevitably got snapped up by Hydra Head late last year. So what of their debut for the label, 'Blue Lambency Downward'. Well, it's quite simply amazing, and... go on, I'll say it... better than 'Dowsing Anemone...'. 99.9999% of bands... you know what to do. Pack you're fucking bags. There's no coming back from this.

'BLD' is a progression though. It's not more of the same (which would still have been very, very, very, very welcome), but is just, well, different. But brilliant. Bloody Brilliant! It's much less heavy, with pretty much all metal leanings gone. No screaming or mighty riffs so to speak. The heaviest moments are still damn heavy but can't really be described as metal or doom. Just thick, juggernaut classical movements that crash cacophony like, drowning your ears. And they pop in some crazy electronic experiments just for a few seconds to make you smile.

The title track starts off proceedings. It's just mesmerising. Driver's voice is more self assured on this effort, and this increased strength and/or confidence in his vocals makes for an even more accomplished record. After this track with its trademark double figure length it is perhaps important to note than the rest of the album's tracks (bar closer 'Symmetrical Arizona') don't get past the five minute mark. The tracks are much more concise. I'm not going to say that this is a better thing, as I think everything Kayo Dot have done is excellent (and everything before are in the teens in terms of length). The new album is just different. It feels necessary, and the short tracks bizarrely don't feel short, but long. Normally when a track feels longer than it is that's a bad thing, but not here. It's just a weird effect. Can't really say much more. Listen for yourself, I implore you!

Much like my review of A Storm of Light's album, there is little point picking out stand out tracks for this realm of epic music, but 'Right Hand Is The One I Want' is a particular favourite, turning the lounge-y jazz feel that is infused in the album up to eleven.

A brilliant album. Utterly essential. Excuse the buzz words, but Kayo Dot still don't seem to be in everyone's record collection. This is tragic. Do something about it. (However, a quick point might be that Hydra Head's version is seven tracks long, but wait a squillion years and the Japanese version, probably on Daymare, is likely to feature the eighth track Driver and Matsumiya mentioned as having recorded during the album sessions).