A Storm Of Light And We Wept The Black Ocean Within 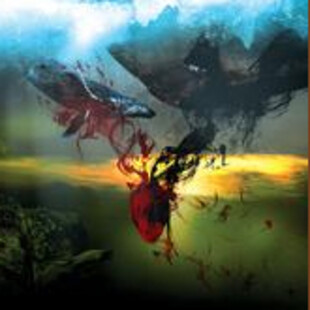 A Storm of Light feature Josh Graham of Neurosis, ex-Red Sparowes, Battle of Mice, etc. Their line-up also includes Vinny Signorelli of Unsane fame. So what should you expect from these guys?

Well, their debut album does fall into the new genre everyone's either loving, hating or bored-of-already - that of 'post-metal'. But don't let that put you off. No, no, no. Because this album if fucking fantastic. Sure, a first time listen, might make one wince that it sounds a little too Neurosis like. But wait, be patient, keep listening, go listen through it again. Ah, yes. There. Right there. It's bloody good. Oh, it gets better with every listen does it? Oh. Oh, it's what 'Given to the Rising' could only dream of being? Nice one.

Barring my stream-of-consciousness thoughts whilst listening to the album a few times in one night, there's one thing you should know. You should include this into your CD or LP collection when it comes out.

'And We Wept The Black Ocean Within' is stunning, with Josh Graham showing that he can certainly play guitar and not just fiddle around with visuals for Neurosis. He left Red Sparowes earlier this year because they were writing lighter and lighter material, and he was writing heavy riffs. Thank you Josh Graham for forming this band. This is what the so-called post-metal bands should start doing. Too many are turning into so-called 'post-rock' bands. Stick with the heavy dammit! And A Storm of Light have definitely done that! In fact at times the album can sound damn heavy such as on 'Black Ocean'.

The album is roughly an hour long and is a dreamy languid dirge like affair. And whilst those words might not immediately make ninehertz listeners want to listen, they should. It's hazy metal - if sounds effortless but it's heavy, multi-layered and just brilliant. Picking out highlights is a little pointless with a lot of this kind of music as it's obvious the listener must invest the time to listen to the album as a cohesive whole. However, 'Vast and Endless' and 'Mass' are little blips of genius in the hypnotizing mire of the album.

Quick note on the artwork also by Josh Graham - it's highly original and bloody lovely. Something a bit different to the norm (which I guess it has to be due to many post-metal bands having a close affinity to 'epic imagery' such as the sea). Go check this album out, and give it time to sink in. Great new band to add to the new post-metal cannon.