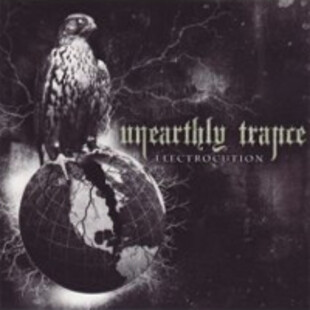 Well, here we have it, the new disc from New York's finest purveyors of sludged up Doom, Unearthly Trance. Once again Sanford Parker (Minsk/Buried At Sea member, Pelican/Rwake/Lair Of The Minotaur producer) is behind the desk as he has been for the last two albums and he's done a great job of capturing not only the ferocity but the texture and subtlety that Unearthly Trance have been working into their sound from day one. It's still as heavy as all Hell but there's a much expanded sense of dynamics and variety on 'Electrocution' than shown on 2006's 'The Trident'. For me, the most striking thing about 'Electrocution' is the new focus on the vocals, it really feels like Ryan Lipynsky (vocals/guitar/noise) has cut loose from genre restrictions and decided to mix it up a little. That's not to say there's not plenty of throat shredding screaming Sludge/Doom on offer, there is, it's just been tempered with sections that almost feel like they come from The Melvins' playbook.

Opening track 'Chaos Star' starts with a nice midtempo feel and some distinctly Buzz Osbourne esque howls before the customary throaty scream kicks in around the midway point along with a drop in pace that crawls onwards to blistering finale complete with *shock* guitar solo. Follow up track 'God Is A Beast' is a monster. Clocking in at just over 7 minutes it's a confident Doom workout with another great vocal performance and some huge riffs, the closing refrain of 'God is a beast. Your God is a beast.' as the riff slows to its ultimate conclusion is a standout moment. 'The Dust will Never Settle' is a more traditional number, albeit a bit more uptempo than what has gone before with a simple repeated vocal pattern over an almost punk style soundtrack, this rapidly collapses into blast beat section (!) that leads into a groovy midpace second half. 'Diseased' alternates between a very Melvins flavoured main section and a pained howl with a nice creeping note progression. 'Religious Slaves', 'The Scum Is In Orbit' and 'Burn You Insane' follow in a slightly more traditional vein but still throwing in the odd curveball with unexpected vocal twists and turns and changes of pace. Album closer, the twelve minute 'Distant Roads Overgrown', simultaneously condenses and expands what has gone before with a dash of everything in their arsenal, a distinctly Pelican sounding middle instrumental break and 3 or 4 minutes of minimal swirling soundscape to close.

This is one of the best albums I've heard this year and has single handedly managed to drag me out of a general malaise when it comes to writing about music. If you've never delved into the world of Unearthly Trance, now's the time, 'Electrocution' is probably the most accessible material to date, but not at the expense of 'heaviness' and the core aesthetic of the Sludge/Doom scene. It's the sound of a confident band laying their cards on the table and giving their all.