Slomatics/agent Of The Morai Split Cd 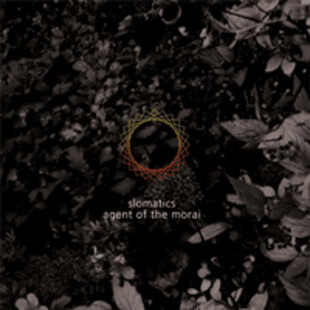 Firstly, if i may just beg your indulgence for a few seconds I would like to take this opportunity to announce the following:

Thank you for your patience.

In case you're wondering, I've started this review in such a daft fashion mainly because in my queer-for-seriously-heavy-guitar-tones-heart, that little outburst is the only real review necessary for this foundation shaking downtuned little bombshell of a CD. Realistically, however, I know that neither 9hz, Calculon Records nor the bands themselves would really appreciate the lack of detail so with that out of my system I can now get a little more in depth.

The EP leads in with three tracks from sludged up Irish doomers Slomatics. Having bought last years 'Kalceanna' EP and being pretty much completely blown away by it I was expecting good things here and there's no denying that the three piece have delivered the goods again in spades here. Heavy as you could possibly want with their Matamp driven low end pummeling, the clever use of dynamics within the song writing and refreshing use of an actual singing voice rather than a scream/roar continue where the previous release left off in setting Slomatics apart from the majority of their peers. What you basically have here is a 'slow doom' band a la Stumm and their ilk with their 'three chords a minute' mandate but played twice as fast. that may sound like a total contradiction but I don't really care. The songs are well thought out, never lose your interest and really do make you have to think to come up with a direct comparison as the scope involved stretches well beyond your bog standard quiet bit/loud bit dynamic. Stand out track for me is probably the brilliantly titled EP opener 'Doometronome' although this is probably as it's the most similar in feel to their older material and I have a sneaking suspicion that the slower, more atmospheric parting shot of 'Under Canopy' may be starting to inch ahead in the ratings.

The final two tracks for your perusal are from Leeds based sludged up groovers Agent Of The Morai. I'm less familiar with these boys having only heard one song previously but again, what I'd heard had left a lasting good impression and they've certainly not let me down anymore than Slomatics have. Both tracks are rollicking sludgeathons from start to finish sounding like a blend of Iron Monkey's stonerish grooving 'Our Problem' best and Charger's slowest, nastiest dirges. It might well be cheap to throw those two names at this band but along with fellow Calculon sludgers A Horse Called War, AOTM aren't just counting off the reference points here but really taking everything to heart and laying it back out as their own with the bouncing Sabbathesque grooves taking the lead much more so than almost any other sludge band I can think of for ages, especially on closing track 'Stained Glass'. The results being a hell of a lot more enjoyable and (arguably more importantly) memorable for it.

As with all Calculon releases of course, production levels are excellent across the board from the simple but beautiful design of the packaging to the full bodied, bowel wrenching, earth rending production on the music held within with both bands sounding almost heart stoppingly huge at all times despite not having a bass player between them. Taking into account that you'll get all of this AND change back from a fiver and you really are going to be hard pushed to find anything to moan about here and if you're actively trying to find something worth moaning about on a cd of this calibre then frankly you deserve a good solid shoeing anyway!