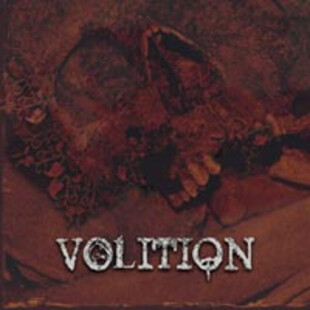 Hailing from the bleak ship building town of Barrow-in-Furness, it's no surprise that Volition specialize in penning cold, pessimistic doom. The quintet's well received demo led the band to sign with Israel-based Total Rust Recordings and this is their debut full length.

The album contains eight tracks that merge together to form an hour's worth of truly monolithic music. Much like fellow northern purveyors of slowness Atavist, there is an inherently primal quality underlying Volition's songs; like they're being played by suicidal troglodyte cave dwellers. Structurally, the band use gradual and subtle shifts in pace to add variation to their lengthy tracks, as to the untrained ear the songs may appear very similar. The vocals add a well contrasting element to the aural darkness with Dave Hodge's growls being lowly forced out and chanted like some dark priest recruiting to the cult of despondency, whilst bassist Mark Burn's absurdly screamed back-ups sound like a victim pleading with a sadistic torturer not to decapitate his very soul.

'Tempestuous Seas' and previous demo track 'Cheyne Stoking' are a couple of the album's highlights, the latter containing an effective spoken word lyrical approach to open the song, followed by obelisk leveling riffage and an exquisitely haunting lead played by guitarist Jas Murray. Besides the quality of the songs, the other reason the album works so well is that the production and engineering was handled by the extremely skillful Bri Doom of Lazarus Blackstar. 'Volition' sounds so deafeningly gargantuan you would be hard pressed to find a better production for this style of music. This album is a collection of hypnotic sonic pendulums which serve to slowly pull you under their weight and imbue your mind with despair.